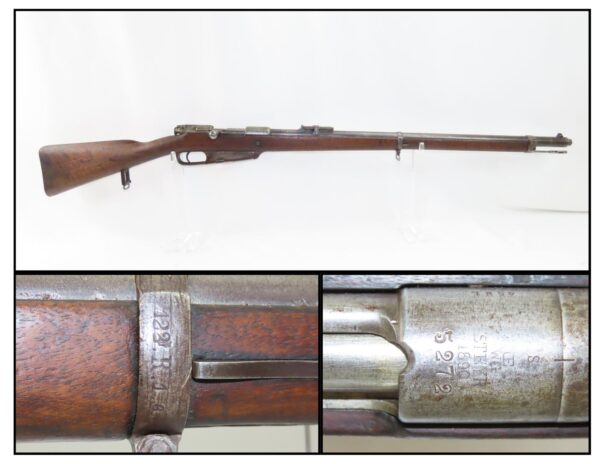 With Unit Marking on the Barrel Band

Here we present an antique Steyr German Contract Gewehr 88/05, also referred to as the Model 88 Commission Rifle, made circa 1890 in Austria with a production run between 1888 and 1899. To settle a patent infringement claim by Steyr-Mannlicher of Austria, Germany contracted the Austro-Hungarian company to be one of the manufacturers of Gewehr 88s.

The Gewehr 88 was a late 19th-century German bolt action rifle, adopted in 1888. The invention of smokeless powder in the late 19th century immediately rendered all of the large-bore black powder rifles then in use obsolete. To keep pace with the French, who had adopted smokeless powder “small bore” ammunition for their Lebel Model 1886 rifle, the Germans adopted the Gewehr 88 using its own new M/88 cartridge, which was also designed by the German Rifle Commission. The rifle was one of many weapons in the arms race between the Germanic states and France, and with Europe in general. Later models, such as this 88/05 replaced the use of en-bloc clips with stripper clips and went on to serve in World War I to a limited degree. Unlike many German service rifles before and after, it was not developed by Mauser, but rather the arms commission, and Mauser was one of the few major arms manufacturers in Germany that did not produce Gewehr 88s.

The overall condition is very good. Strong action. Very good bore, bright with sharp rifling. Solid stock. Numbers are matching on the barrel and receiver. There is an old German military unit marking on the barrel band. Farsi markings throughout including the rear sight for Turkish use. A very nice rifle from 1890s Austria that would have been used into the Great War.