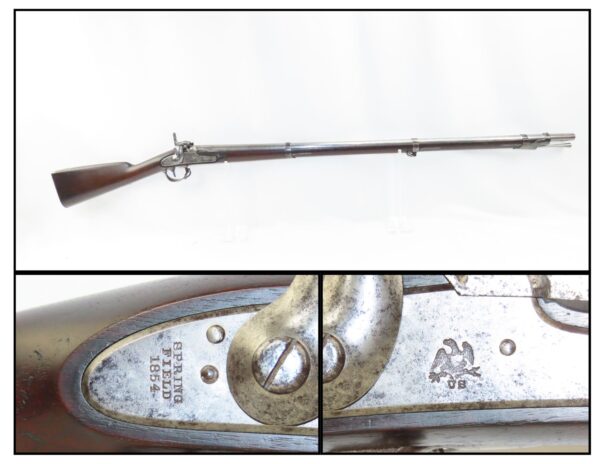 Here we present a Springfield Armory U.S. Model 1842 Percussion Musket, manufactured circa 1854 in Springfield, Massachusetts. From the period of 1844 until 1855, about 275,000 Model 1842 muskets were manufactured at the Springfield and Harpers Ferry Armories, along with some being made by private providers commissioned to assist in production. Along with usage during the Mexican-American War in 1846 through 1848, these would have been in the hands of local militia all over the antebellum United States and used by both combatants at the outbreak of the American Civil War. Sights were not included in the smoothbore’s design, but arrived later as the muskets were rifled later in its life. The Model 1842 was the first regulation percussion musket to be manufactured at both Springfield and Harpers Ferry Armories, as well as the first to be produced by both national armories with fully-interchangeable parts. These were also the last .69 caliber smoothbore arms to be produced by the U.S. government.

Both the original smoothbore version and the modified rifled version of the Model 1842 were used in the American Civil War. The smoothbore version was produced without sights (except for a cast one on the barrel band). When Model 1842 muskets were modified to have rifled barrels, sights were usually added at the same time as the rifling.

The overall condition is good. Strong action. The bore is semi-bright. Solid walnut stock with a cartouche on the left stock flat. This example has an “1854” dated lock. “US” stamped butt plate tang.