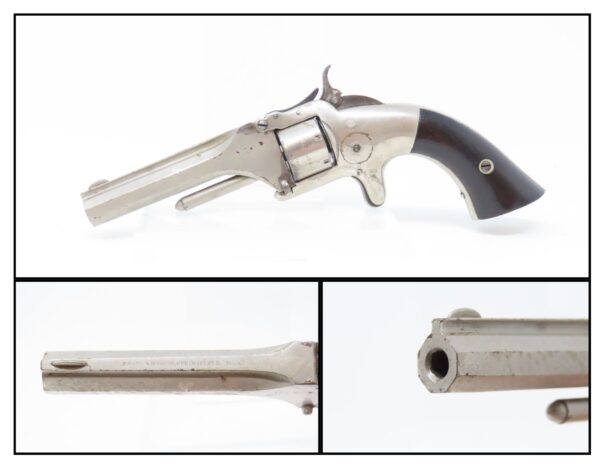 Here we present an antique Smith & Wesson Number 1, First Issue, Fifth Type Revolver, made circa 1857-60 with a serial number of 5720. Though this falls into the Sixth Type serial number range, it appears to be of the 5th Type variation based on its characteristics. The Sixth Type serial number range was from the low 5500s to the end of the production run at 11,670. But records are a bit sketchy in that era, so this very likely is the Fifth Variation. Regardless of which series it is, it is a scarce little revolver.

The No. 1 was Smith & Wesson’s first metallic cartridge firearm. It utilized the idea of the “bored through cylinder”, which was patented by Rollin White and subsequently exclusively licensed by Smith & Wesson. This concept has forever changed revolving firearms design, and is the same idea used in revolvers today. S&W, via Rollin White himself, aggressively sued any patent infringers and were able to hold their monopoly on the American market for cartridge revolvers from about 1857 to 1870, whereupon their patent expired. The results were a very profitable business, a broke Rollin White, and a grudging U.S. Chief of Ordnance Alexander Dyer, who was still angry in 1870 about not being able to use the technology during the Civil War. The U.S. government ended up giving Colt their contracts since they valued the larger .44 caliber in the Colt 1860 Armies over the .32 caliber full sized No. 2 Armies.

This First Issue is a small revolver that only weighs about 10 ounces and holds 7 shots chambered for a .22 Short rimfire cartridge. The barrel and non-fluted cylinder pivot upward upon release of the latch under the frame. For those not wanting or needing a full-sized gun or for those who wanted a backup, this revolver was the ideal firearm for the turbulent 19th century. The sides of the frame are rounded on the 1st issue. Other characteristics which distinguish the more valuable 1st issue from later issues include a perfectly round side plate and a hinged hammer spur. Since this was the first of its kind, it is not difficult to understand the need for the number of variations within this model designation. Many small improvements were made on the way to the next model.

The overall condition is fine. Original nickel finish. The action is strong. Semi-bright bore in good shape. The rosewood grips are firm and smooth. Legible address on the cylinder. A rare, fine piece of S&W history!