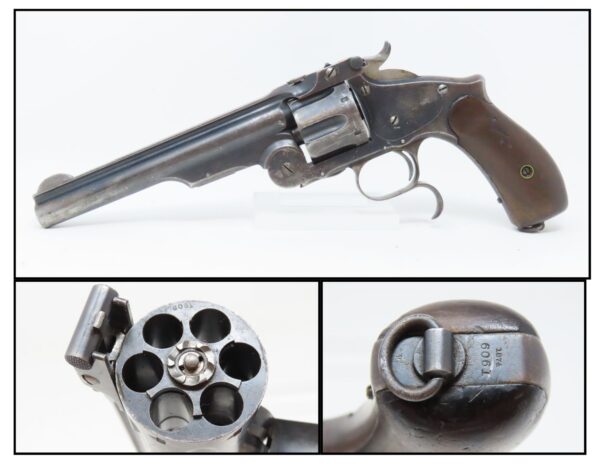 With JAPANESE ARMY Marking on the Barrel Rib!

Here we present an antique Smith & Wesson Number 3, Third Model Single Action Revolver, made circa 1878-79 for the Japanese Government.

Prior to Commodore Perry’s Expedition to Japan in 1853, Japan’s ruling class, the shogunate, instituted an isolationist policy in an effort to keep its people from being influenced by outside forces. The Dutch were the sole Europeans granted permission to have a trading outpost on the Japanese islands, and most other trade was done with China and Korea. These policies had frozen Japan in time in many ways, not the least of which were militarily or technologically. So it was when Perry arrived with his flotilla of well-armed ships and men. The Japanese shogunate had no choice but to concede to allow the United States to resupply and trade at Japanese ports. This also opened the door for other world powers to sign so-called “unequal treaties” with Japan through threat of force. Like the name suggests, these treaties favored the strongmen and left Japan at a large disadvantage.

Japan relied heavily on imported arms from all over the world until they established their own Imperial Japanese Army Tokyo Arsenal in 1871 and began production of their first indigenous longarm in 1880 (the Meiji Type 13 Murata Bolt Action Rifle). Japan continued to purchase revolvers from abroad, especially Smith & Wesson. When Russia adopted the S&W Model 3 .44 Russian variant, Japan followed suit by purchasing batches of them from starting in 1878. These revolvers were stamped with Japanese markings on the barrel rib and were in use during the First Sino-Japanese War (1894-95), when Japan defeated a modernized Chinese Army. Again, Japan went to war, this time against the Russians in the Russo-Japanese War (1904-1905), upsetting the odds and stunning the world by defeating such an established power. These sidearms proved worthy and were rewarded with long service lives, still being widely used during the Great War. By the time of World War II, many were still in use, having been relegated to the rearguard, but kept alive via arsenal refurbishment. These are considered along with Japanese “last ditch” weapons and some were brought back with U.S. servicemen at the end of the war. With a service life decades long, with multiple conflicts, it is a wonder that we still have any examples to be found today.

The first of the Smith & Wesson Model 3 revolvers to be acquired by the Japanese were roughly 5,000 Smith & Wesson Model 3 Russian 2nd Model revolvers that were purchased from the London based firm of H. Ahrens, who had offices and a warehouse in Yokohama for the purposes of engaging in the Asian trade. These guns were purchased circa 1878 and shipped during the following months in 1878-1879. Examples of these revolvers are known with both Japanese Naval and Army markings. The next group of Japanese military purchased Smith & Wessons were some 1,000 Number 3 Russian 3rd Model revolvers that were again provided by H. Ahrens of Yokohama, and were shipped during 1878.

Smith & Wesson revolvers, then as now, are some of the finest in the world. Excellently machined, well-proportioned and accurate. It is no wonder why so many records of the era were set with this revolver. Notable shooters and owners of the original No. 3 include Buffalo Bill Cody, Ira Anson Paine, F.E. Bennett, Annie Oakley, Frank Butler, General George Custer and Theodore Roosevelt.

Even though the butt is dated “1874”, it was produced for Japan between 78-79. The frames are thought to have been made previously in anticipation of the cancelled Russian order. There is a small round Japanese marking on the top of the barrel rib.

The overall condition is very good+. Original blue finish. The action is robust and tight all the way around. The bore is mirror bright with sharp rifling. Both grips have seen much use over the years and remain solid. A neat example of how Japan was quickly catching up to the West after its prolonged isolation, from Smith & Wesson!