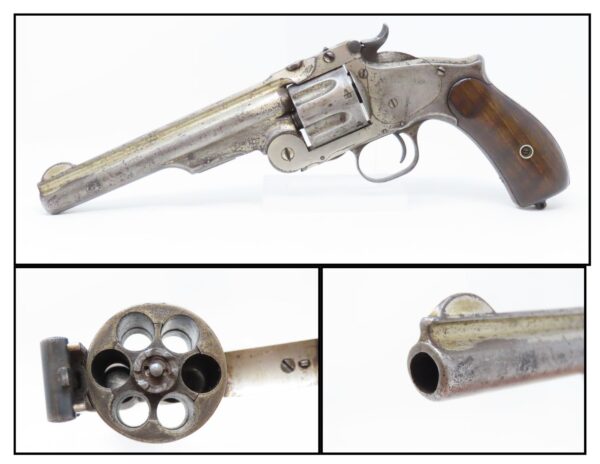 Here we present an antique Smith & Wesson Model No. 3 Single Action Revolver, made circa 1874-77. Smith & Wesson produced large numbers of the Model 3, in three distinct models, for the Russian Empire by special order. The first was the 1st Model Russian with the Russian Ordnance Inspector mandating a number of improvements to the design, resulting in the 2nd Model Russian, with a final revision to the Russian design being known as the 3rd Model Russian. In 1877, S&W discontinued production of its Model 3 Russian, along with its other Model 3s (The American and The Schofield) in favor a new improved design called the “New Model” Number Three. Smith & Wesson nearly went bankrupt as a result of their Russian contract production, as the imperial government assigned a number of engineers and gunsmiths to reverse-engineer the Smith & Wesson design, and then began to produce copies of the revolver.

Smith & Wesson revolvers, then as now, are some of the finest in the world. Excellently machined, well-proportioned and accurate. It is no wonder why so many records of the era were set with this revolver. Notable shooters and owners of the original No. 3 include Buffalo Bill Cody, Ira Anson Paine, F.E. Bennett, Annie Oakley, Frank Butler, General George Custer and Theodore Roosevelt.

This one “road the river” and shows a ton of holster wear at the muzzle, meaning that it was drawn and re-holstered a lot. In addition, the trigger guard spur upon which some chose to rest their middle finger was deleted long ago–the stump is still visible. Likewise, the lanyard ring was removed. These are the kinds of modifications someone who used their gun a lot would make, and the kind of wear you would expect of a gunfighter’s revolver.

The action (hammer/trigger) are functional, though the cylinder does not index and there is no half-cock notch. 2 spokes have broken off the ejector rod. The grips are firm and solid! A good amount of nickel finish remains. This is a neat old S&W Russian in .44 that many consider the peak Old West revolver!