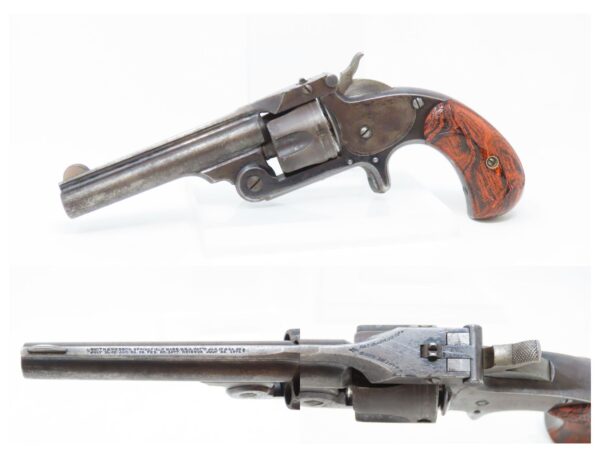 Here we present an antique Smith & Wesson Model Number 1-1/2 .32 S&W Third Issue Revolver, made circa the 1880s in Springfield, Massachusetts. The No. 1 was Smith & Wesson’s first metallic cartridge firearm. It utilized the idea of the “bored through cylinder”, which was patented by Rollin White and subsequently exclusively licensed by Smith & Wesson. This concept has forever changed revolving firearms design, and is the same idea used in revolvers today. S&W, via Rollin White himself, aggressively sued any patent infringers and were able to hold their monopoly on the American market for cartridge revolvers from about 1857 to 1870, whereupon their patent expired. The results were a very profitable business, a broke Rollin White, and a grudging U.S. Chief of Ordnance Alexander Dyer, who was still angry in 1870 about not being able to use the technology during the Civil War. The U.S. government ended up giving Colt their contracts since they valued the larger .44 caliber in the Colt 1860 Armies over the .32 caliber full sized No. 2 Armies.

The S&W Model No. 1-1/2 Revolver Third Issue is known as the “Model 1-1/2 Single Action Revolver”. The major difference between this issue and the first two issues is the breaking at the top, which is consistent with the design of the Safety Hammerless .38 Single Action. It also lacks the ejector rod under the barrel, the large hinge in front of, and just below the barrel, and the extractor that ejects spent cartridges when the barrel is hinged downward. This revolver marked the debut of the .32 S&W centerfire cartridge. Serial numbers range from 1 to approximately 97,500 with a production run between 1878 and 1892.

Here is a nice S&W revolver from the glory days of the Old West!