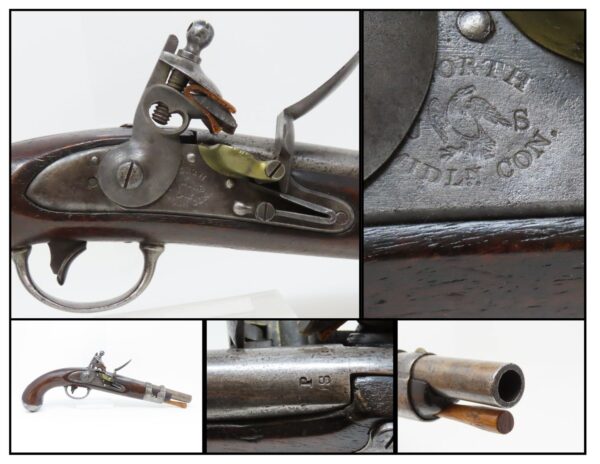 Here we present an antique U.S. 1816 Simeon North flintlock pistol, made 1817-20 in Middletown, Connecticut. Fewer than 20,000 of these were made for the U.S. military. Many were updated to the much more reliable percussion system in the 1830s. The service life was quite long for this pistol. The famous scout and Indian fighter Kit Carson fought with one of these, still in its original flintlock form, during the Mexican-American War from 1846-48. Even though percussion arms, including pistols, had been adopted by the U.S. in the 30s, it was not unusual for flintlocks to still be in use. Primary conflicts that would have involved this piece during its service life were the Seminole Wars, the Pawnee Expedition, the Mexican-American War and even the American Civil War.

The lock is marked “S. NORTH, US, MIDL. CON.” along with the Federal Eagle. The barrel is marked “US” and “P” for proved, along with initials “RJ” near the vent. “US” is stamped on the left forend in between the barrel band. Though many of these pistols were converted to percussion, here is a true survivor in its original flintlock form.

The overall condition is very good. The action is strong all around. The bore is in good shape for its age. The stock is solid. There is a stable crack that does not move under pressure that emanates from the rear lock screw. This is a typical place for this pistol to develop such a crack and it shows no sign of opening further. This is a lovely example of the Simeon North Model 1816!