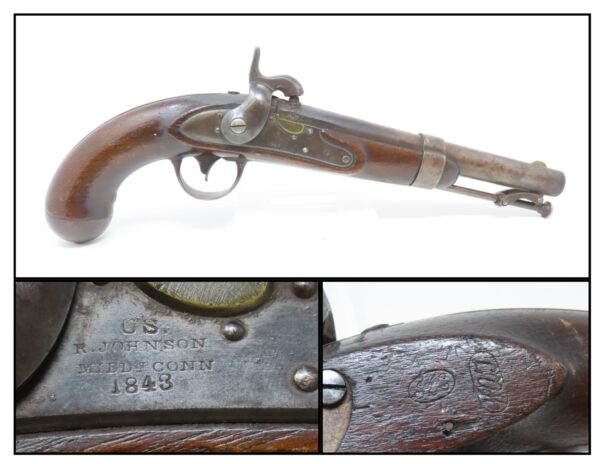 STANDARD ISSUE of the MEXICAN-AMERICAN WAR!

The pistol has an 8-1/2 inch round barrel with a brass front sight blade, swivel ramrod with button head and iron mountings. It was made as a flintlock but received an armory conversion to percussion to keep it up to date and in service. The lock is marked “US / JOHNSON / MIDDN.CONN. / 1843” below the brass pan. The left stock flat is marked with two oval cartouches. The Model 1836 Flintlock Pistol was the standard issue handgun of the Mexican War and they were in service throughout the Civil War.

The overall condition is good. Strong action. The bore is smooth and in good condition. This example has a stable stock. There are two period splits on the left side of the fore stock that appear along the grain and climate related. There are two legible cartouches on the left stock flat: “JH” for Joseph Hannis and “WAT” for Captain William A. Thornton. Here is a wonderful example of a Model 1836 from Robert Johnson!