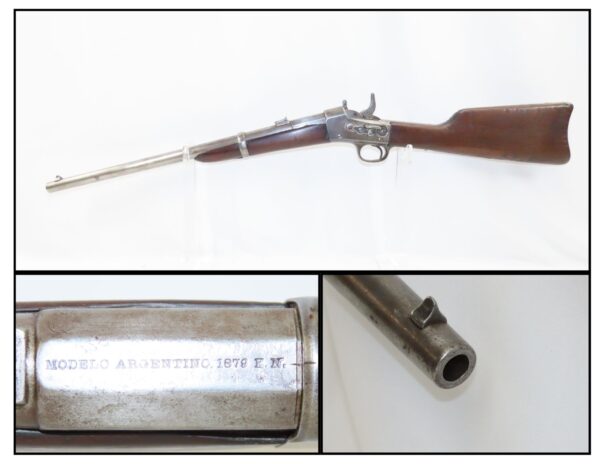 Here we present an antique Remington Argentine Contract Model 1879 Rolling Block Carbine made circa 1879 in Ilion, New York. This example is one of the many “export” rifles made for foreign governments, all based on the Remington Rolling Block design. The Remington name and address on the tang of the receiver are very clear. The model and date information are listed on the barrel: “MODELO ARGENTINO.1879 E.N.”

The “RA” in circle proof is for República Argentina, the official name of Argentina in Spanish. The E.N. abbreviation is for the Ejercito Nacional, or National Army in Argentina. Around the late 1800s Argentina was a developing world power and had one of the largest economies in the world. Like any growing power, it needed arms, and as there were not yet local producers up to the task, they contracted out for their weaponry. They would later replace the rolling blocks with the more modern Argentine Contract Mauser rifles towards the end of the 1800s.