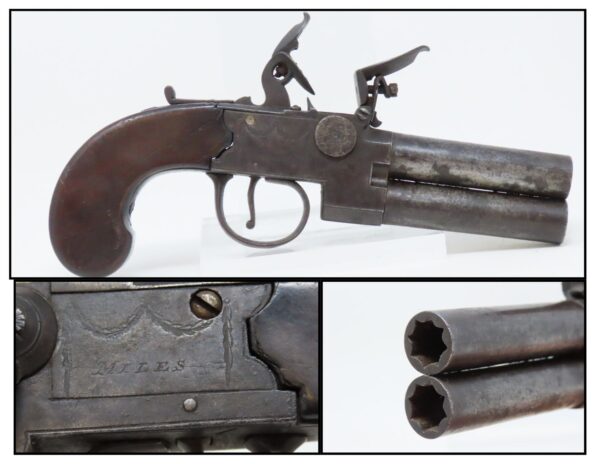 Here we present an antique John Miles Tap Action Over/Under Flintlock Self Defense Pistol, made circa the late 1700s to early 1800s. John Miles worked in London as a gunmaker from 1769 to 1798, immigrated to Philadelphia and continued as a gunmaker until passing away in 1808. From the time that firearms were introduced, gunsmiths had experimented with various ways to turn those single shot weapons into multi-shot weapons. Prior to the use of “repeating” arms, one of the most successful systems was to use multiple barrels, each with their own load and charge.

In Great Britain, where this pistol was made, many pocket pistols were produced with two or for barrels, and sometimes even more. The downside to most of these early designs was that occasionally all the barrels would discharge at the same time. This low reliability resulted in many problems, none being less than the inability to get off a second shot quickly. The Tap Action solved that problem. This flintlock design usually incorporated two barrels, one over the other. A manually rotated flash chamber in the frame allowed the shooter to fire each barrel individually or fire them at the same time. With the “tap” in the up position, only the flash hole to the upper barrel was exposed to the spark generated by the powder in the pan. With the “tap” in the down position, the flash channel connected to the chamber of the bottom barrel. The lower tap was dished to contain powder, so that after the upper barrel was fired, all you had to do was flip the side lever to reorient the tap, re-cock the pistol, and fire the lower barrel.

This little self-defense pistol would have been most at home in the pocket of anyone in the busy cities of London during the late 1700s to the very early 1800s.

The overall condition is good. The action is strong. The top jaw is missing with half of the screw still threaded into the bottom jaw. The bores are in good shape for their age. The grip is seated firmly against the frame. “MILES” is engraved on the left frame with “LONDON” on the right. The tap action lever functions properly. 18th Century London proofs can be seen on the bottom of the frame ahead of the trigger guard. This is a very neat pistol by John Miles of London and later Philadelphia!