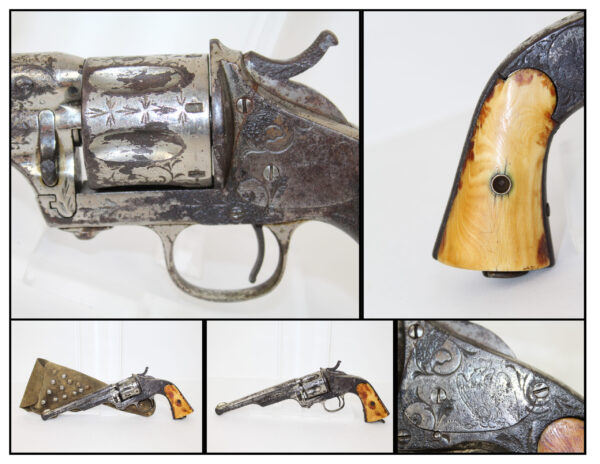 Here we present an antique Merwin, Hulbert & Co. Large Frame Open Top Single Action Army Revolver, made circa the late 1870s in Norwich, Connecticut. These were made by Hopkins & Allen for Merwin, Hulbert & Co. Only several thousand are thought to have been produced. These revolvers are considered today to be some of the best made of the late 19th Century and the Wild West, even better to some than similar Colts and Smith & Wessons, though we all know who stood the test of time. These pistols certainly tended to have different, very well-thought features than their competition, and they were extremely well-made.

This early Open Top Army features 6 shots of .44-40 WCF or, as Merwin & Hulbert put it: “CALIBRE WINCHESTER 1873”. It features engraving throughout, starring a Mexican Eagle with a snake in its beak on the left side of the frame and a bull on the right side. The leather holster appears to have been made specifically for this revolver and features two belt loops on the back and is decorated with tacks on the front. Grips are old ivory. Lanyard ring on the bottom of the square grip frame. This one has the look! Imagine where this revolver has been!

The overall condition is good. The nickel finish is about 20% with the balance of the steel having a dark patina. The markings are legible. The ivory grips are smooth and solid with a yellow hue. The bore is fair. The action is strong. The holster is in good condition.