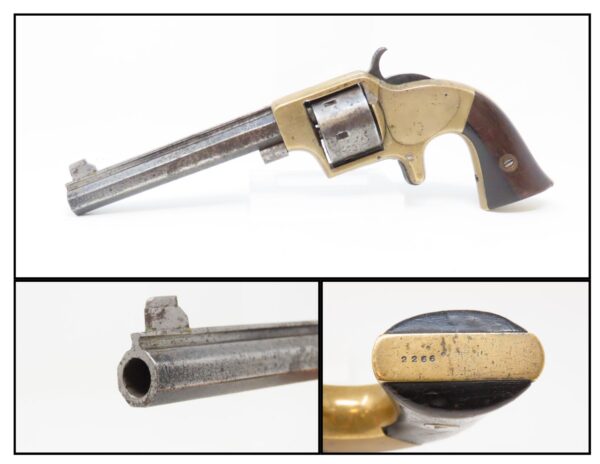 Here we present an antique Merwin & Bray Front Loading Plant Manufacturing Company Pocket Model Revolver, made circa 1865 in New York and period converted when the more reliable centerfire cartridges became available. Makers of revolvers during the American Civil War had three choices: 1) they could take their chances violating the Smith & Wesson owned Rollin White Patent for the concept of a “bored through cylinder” to accept metallic cartridges, 2) they could continue to make percussion guns with all of their disadvantages, or 3) they could invent their own concept that was both an improvement over percussion guns and circumvented the Rollin White Patent. The latter option is what Plant’s chose.

Around 20,000 of these were manufactured in mid-1860s. The design is essentially a small scale version of Plant’s Army Model that fired .30 caliber cup primed ammunition that loaded from the front of the cylinder.

Plant’s Mfg. Co. was financed and represented by the famed firearms agents Merwin & Bray, hence their name on the top of the barrel. Their revolver featured a “cup-primed” and front-loading concept, which was among the best attempts to get around S&W’s 12-1/2 year stronghold on cartridge revolvers. They found relative success with the public rather than with the military.

The action is strong. The bore is in generally good shape for age nice rifling and a few spots of pitting. Both grips are firm and in good shape. Later addition front sight and cylinder pin. The right side of the brass frame shows a casting flaw and there is a thin spot that has fallen through. A Civil War revolver with lots of character!