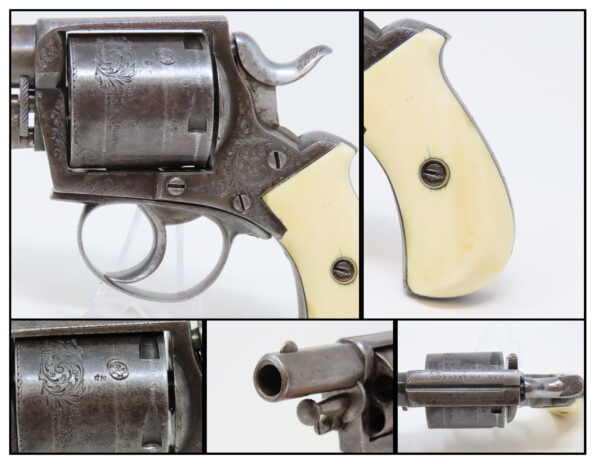 Here we present an antique Engraved “BULLDOG” .44 Caliber Revolver with ivory grips, made circa the late 1870s in Belgium and sold by Liddle & Kaeding of San Francisco, California.

This example showcases ornate scroll engravings and “LIDDLE KAEDING/SAN FRANCISO” can be read atop the frame along the groove. After Robert Liddle and Kaeding first met in the 1860s, it was not long before the partnership began to flourish. They named their firm “Liddle & Kaeding” in 1866. The company had grown to be the largest firearms dealer in the area during the 1870s.  It remained in operation until 1889, but Liddle eventually went back to working for himself under his own name.

Included with the revolver is a Mexican Federal Registration Card. It identifies the revolver as .44 caliber with markings reading, “LIDDLE KAEDING” and being registered to “LOPEZ PORTILLO P. JOSE.” Jose Guillermo Abel Lopez Portillo y Pacheco, was the 51st President of Mexico from 1976 to 1982. López Portillo ran unopposed and is the only one in recent history to do so. During his presidency, the nation of Mexico saw a rise and fall in its economy, a declaration of sovereign default, corruption, and nepotism. It is no surprise that in a 2012 survey, 44% of the population considered his administration as “very bad.” Makes one wonder if this was a collectible for him or something he may have carried on his person!

The overall condition is very good. The action is strong. The bore is nearly smooth, though rifling is visible, and the surfaces are fairly dark. The ivory grips are solid and remain in good shape. This little revolver has been all over! From Belgium to San Fran, CA, to Mexico City!