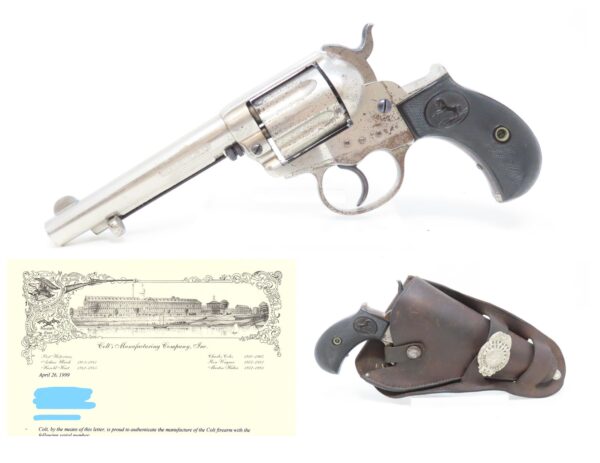 Here we present an Antique Lettered Colt Model 1877 “Thunderer” Revolver with the early etched panel barrel, manufactured in 1880. The factory letter confirms the revolver’s configuration when it was shipped to Schoverling, Daly & Gables of New York on September 1, 1880. This one comes with a very nicely preserved vintage double loop rig and deputy sheriff’s badge from Seneca County, New York. The back of the badge is marked “S.H.REESE/57 WARREN ST./NEW YORK NY”.

The overall condition is fine. Original nickel finish with nice nitre blue accents on the back of the hammer and trigger. Excellent action and lockup. The bore is shiny bright with excellent rifling. The rampant colt trademarked grips are near fine. The holster is in very good condition and makes a great display (would not recommend using the holster in order to preserve it). A great example of an early lettered Colt Thunderer with a nice holster!