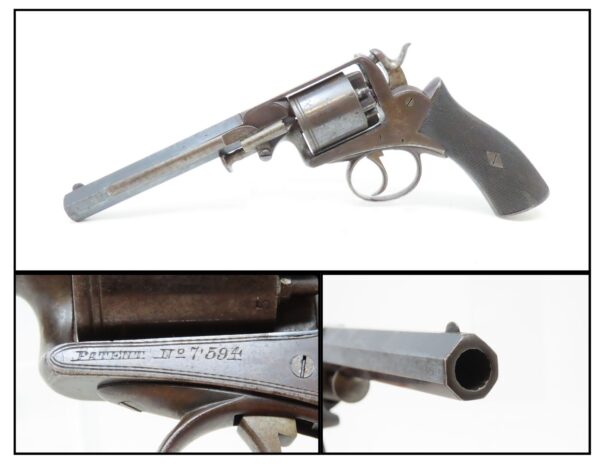 Here we present an antique Trulock & Harris of Dublin Beaumont-Adams Patent Double Action Percussion Revolver, made circa the late 1850s or early 1860s. Robert Adams is credited with patenting the first successful double action revolver in 1851. The Adams revolvers were initially double action only. They were well-received among professionals in the 1850s and served with the British East India Company, with British military officers, and were eventually popular among officers in the South during the American Civil War in the early 1860s, imported from Europe.

From 1853-1856 Adams Revolvers saw use by the British during the Crimean War. One quote from a soldier who was there is impossible to leave out. Writing to Robert Adams he said, “I had one of your largest sized Revolver Pistols at the bloody battle of Inkermann, and by some chance got surrounded by the Russians. I then found the advantages of your pistol over that of Colonel Colt’s, for had I to cock before each shot I should have lost my life. I should not have had time to cock, as they were too close to me, being only a few yards from me; so close that I was bayoneted through the thigh immediately after shooting the fourth man.” Then, during the Crimean War, an officer by the name of Lt. Frederick E. B. Beaumont of the Royal Engineers made design improvements which allowed the shooter to fire in single action in addition to double action, and let Adams utilize his patents.

This one has some interesting engraving on the bottom of the grip frame that may indicate that this along with others of the same sort were used in a government capacity. There are two animal figures with “No. 9”, possibly a rack number.