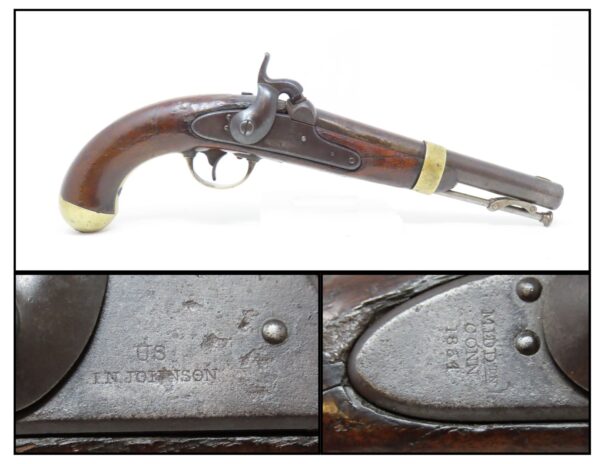 Here we present an antique U.S. I.N. Johnson Model 1842 Percussion Pistol, made in 1854, in Middletown, Connecticut by Ira N. Johnson. The Model 1842 saw service during a time of great change and increasing tension, as well as firearms innovation. The Mexican-American War, the numerous conflicts with Native Americans, annexing of new territory, the rising blood-pressure over slavery, and a quick 36% population increase that all culminated in the blood-letting of the American Civil War. This was the first official percussion pistol to be adopted by the U.S. and simultaneously the last large smooth bore single shot pistol. By 1845 it was the primary issued weapon to the First and Second Regiment of Dragoons, replacing many of their Model 1836 flintlocks, just in time for the Mexican-American War.

The 1842 features sturdy construction with lots of brass for support. This was important during a time when one would expend their shots and still have a fight on their hands. Striking your opponent with the pommel of your gun was quite effective. The ramrod is captive, so that it would not be lost in the heat of battle on top of a horse.

This specimen is marked “US/I.N. JOHNSON” and “MIDDTN/CONN./1854” on the lock. About 10,000 were so marked. Small initials from sub-inspectors are found on various parts of the gun. The primary inspector cartouche is still faintly visible.

The overall condition is good. Strong action. Good bore. Cracks in the wood on both sides are stable. The hinge on the ramrod is not affixed to the barrel or stock.