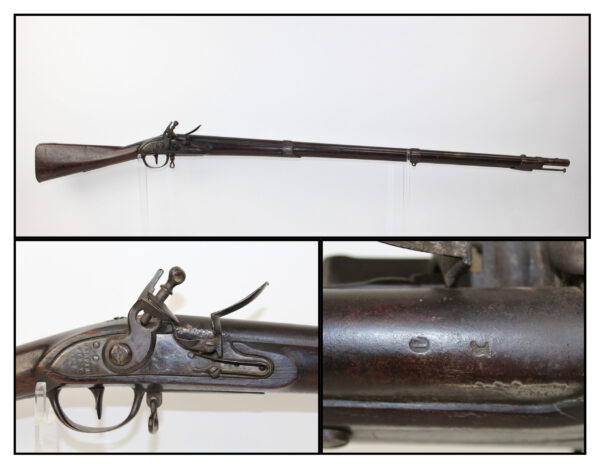 Here we present an antique Harpers Ferry US Model 1816 Flintlock Musket, manufactured at the armory at Harpers Ferry, Virginia circa 1822.

The War of 1812 revealed many weaknesses in American muskets. In an attempt to improve both the design and manufacture of the musket, the Model 1812 musket was created. The Model 1816 made further improvements, and replaced the Model 1812. Harpers Ferry became America’s second national armory after the site was personally selected by George Washington, with the Springfield Armory being the first. The U.S. Congress authorized the building of the new foundry in 1794, and by the following year, was producing hundreds of arms for the national army, which was primarily flintlock muskets and pistols. Inspired largely by the French Charleville Model 1777 musket, Harpers Ferry began producing the Model 1816. The M1816 was a smoothbore, muzzle loading weapon which used a .69 caliber musket ball. A trained shooter could fire between two and three rounds at a range of up to 200 yards per minute.

The M1816 was in production at Springfield (325,000) and Harpers Ferry (350,000) between 1816 to 1844 with around 675,000 muskets produced during this run. It saw service during the Mexican-American War and was even pressed into service during the Civil War in both the updated percussion and the old flintlock format. In the 1850’s, many 1816’s went through the conversion from flintlock to percussion. Here we have a true survivor still in its original flintlock state!

The tail of the lock is marked “HARPERS/FERRY/1822”. The barrel tang is dated “1822”. The top of the barrel bears the view and proof marks “P” and an Eagle’s Head. The left barrel flat is marked “S.M.Co” for the Springfield Manufacturing Company of Ludlow, Massachusetts who worked as a contractor for the national armories. The bayonet is marked with single letter inspection marks and appears to have been shortened and reprofiled long ago, likely due to damage sustained by the tip during training or combat.

The overall condition is good. The metal surface are dark with age. The markings are mostly legible. The walnut stock shows the wear and use that you would expect from a nearly 200-year-old flintlock musket. It remains solid. The bore is smooth and dark. There is a repaired crack about midway between the muzzle and breech of the barrel. The action is still strong. Here is a fantastic US musket with lots of history behind it!