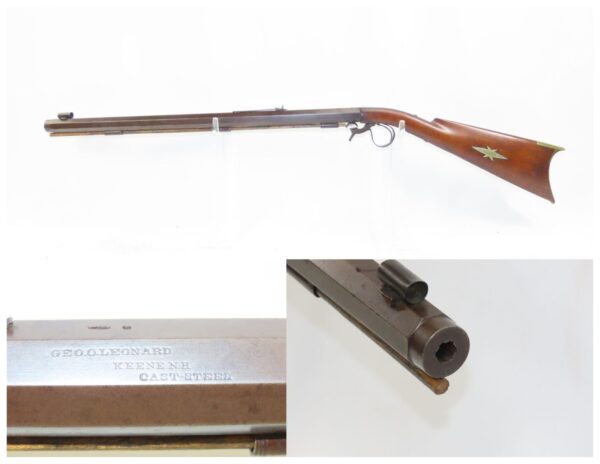 Here we present an antique George O. Leonard Underhammer Percussion “Buggy” Rifle manufactured circa the 1860s in Keene, New Hampshire. George Leonard was a noted gunsmith, and crafted rifles for some of Berdans Sharpshooters, one of which is on display at the Gettysburg Memorial Battlefield Museum. This rifle shows Leonard’s craftsmanship, with a false muzzle on the barrel. George was the son of Artemas Leonard, who was a very accomplished Vermont gunmaker in Saxons River between about 1848 through 1860 and made some of the finest target rifles of his time. Unfortunately, he died young, and George continued his father’s business, moving from Saxons River over into New Hampshire.

The Underhammer was developed for several reasons. By having the ignition under the barrel, it was not in close proximity of the shooter’s eyes. It was also safer from flying debris and less distracting. Most of the debris was forced downwards in a safe direction away from the eyes. Also, the location of the percussion cap meant it was out of the weather when it rained. The ignition was also allowed for the spark to go directly into the powder under the barrel rather than a 90 degree bend like most other weapons. Most Underhammers were very simple in their moving parts. Some of the most simplistic designs consisted of only three moving parts, consisting of a main spring, trigger, and a hammer.

The first known documented Underhammer rifle was a flintlock from Germany circa 1740. On the U.S. side of the Underhammer history, in the book “The Pictorial History of the Underhammer” by Herschel C. Logan, he states that the earliest maker is listed a C. Bird & Company from Philadelphia, Pennsylvania. Bird was a gunmaker who dates from 1790 to 1830. Herschel lists approximately 150 American gunmakers who made the Underhammer gun spanning between 1790 through 1900. In the mid to late 1840s, underhammer rifles became very popular in the United States for target shooting and hunting.

This little gun only measures 37 inches overall with a 22 inch barrel. 11 ¾ inch length of pull. Overall weight is 6.4 lbs. Fine iron sights with a hooded front post. Crisp trigger. Small patch box. A great gun for the buggy or a youth!

The overall condition is near fine. Original finish and patina. The action is excellent. The bore is in very nice shape with sharp rifling. The bore measures .35 inches from land to land. Solid, smooth stock.