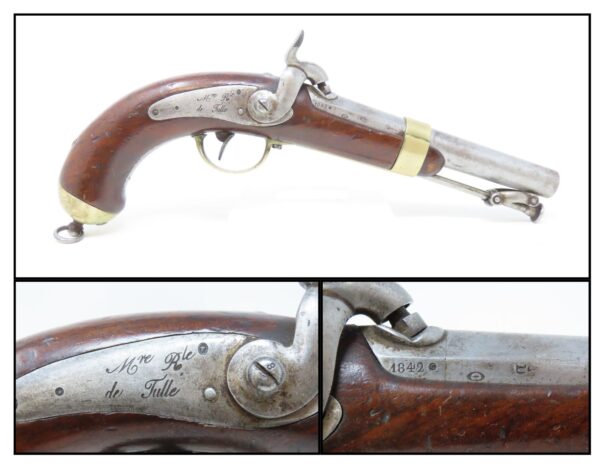 Here we present an antique Tulle Arsenal Mle (Model) 1837 Marine Percussion Pistol made circa 1842 in Tulle, France. In 1837 the French Marine Service, which included the French Navy and associated maritime troops, adopted a new handgun, which would be both a series of firsts and a last for that service. It was the first percussion ignition handgun adopted by the French that was not a percussion alteration and would also be the last French maritime single shot pistol as well. The gun replaced the M1816 and M1822 series of flintlock pistols that were previously in service and introduced the back action percussion lock to French military weapons. The simple back action mechanism would subsequently be adopted in 1840 for French military long arms as well and would remain the standard action system until the end of the percussion era.

The pistol introduced the captive swivel ramrod that had become popular with much of the world’s militaries for use primarily on handguns during the 1830s and would remain that way through the 1850s. This one also features the belt hook which is a feature especially included on naval weapons during this period. This pistol was produced at the French State arsenals, including Châtellerault and Tulle, and in 1849 was replaced the Model 1849, which was a stronger version of the Model 1837.

The overall condition is very good. The action is strong and tight. The bore is in very good shape. “1842” is stamped on the right side of the barrel flat along with various proof and acceptance markings. “Mre Rle de Tulle” is engraved on the lock. The stock is solid. Here is a wonderful French antique percussion pistol.