‹ Back to the shop
View cart “NAPOLEONIC-Era BROWN BESS Flintlock Rifle-Musket Late-18th/Early-19th Century Infantry Rifle from Liege!” has been added to your cart. 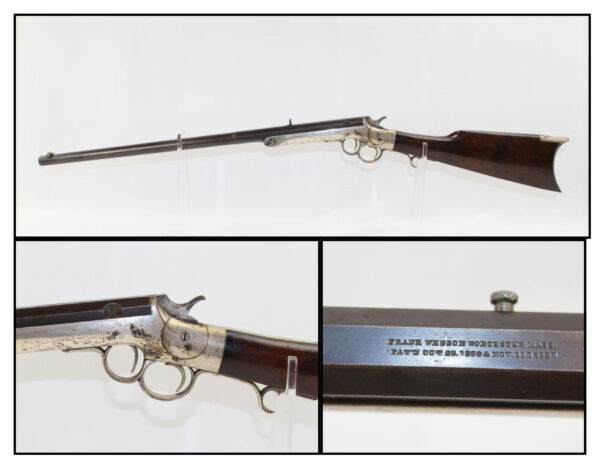 Here we present an antique Frank Wesson Second Type Two-Trigger Rifle in .32, made circa 1863-75 in Worcester, Massachusetts. Frank Wesson was the younger brother of Daniel B. Wesson, of Smith & Wesson, as well as Edwin Wesson, who was also a highly-esteemed gunsmith in the mid-to-late-1800s. The fame of his family’s name was not lost on Frank as he was, in fact, a prolific firearms designer and maker in his own right. He was granted patents in 1859 and began producing rifles of this two-trigger configuration. The Civil War was a fantastic opportunity for many different inventors and over 20 different carbines were used during the conflict on the Union side. Frank Wesson made a version of his rifle in a .44 caliber rimfire carbine format that was specifically geared for Cavalry troops. While it is unclear whether or not Federal troops used these rifles, it is known that Kentucky, Indiana, Missouri, Kansas, and Ohio purchased the first type for their state militias. As William B. Edwards puts it in his book, “they were more popular with the guerrillas and irregular troops in the border fighting.” It is truly amazing the diversity of carbines that were used during the American Civil War, and some, like this one, actually survived after the war and became commercially successful!

This rifle features some special order features such as deluxe wood, a nickel finished receiver and hardware, and a part-octagonal, part-round blued barrel. It is chambered in .32 Rimfire.

The overall condition is fine. The original blue finish is about 60% and nickel is 85%. The markings are clear. The stock is in great shape with nice figure. The bore is in very good shape, semi-bright with nice rifling. The action is excellent. This is a great example of Frank Wesson’s most distinctive design!