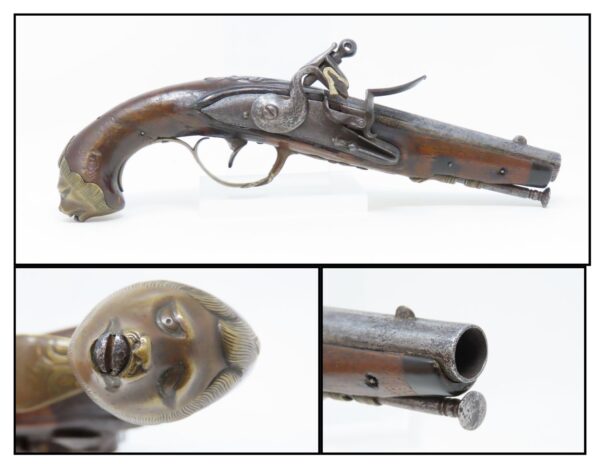 Here we present an antique European Flintlock Pistol, made circa the early 1800s. The bore is an intimidating .54 caliber. Flintlock pistols were used as both military and self-defense weapons. Their effective range was much shorter than a musket and they were frequently used in combination with sword or cutlass. This pistol could have been purchased privately by a gentleman or an officer and carried into battle to use as a sidearm.

This example conjures thoughts of pirates sailing on the vast sea, a self-defender stopping a street mugging, or a shop owner protecting his wares. The pommel is capped with cast bronze in the form of an animal-like creature. The rest of the hardware is likewise cast and engraved. The stock is carved to accentuate with broad, vining scrolls. A very handsome piece.

The overall condition is good. The action is strong and tight. The bore is in good shape for its age. In the early 19th century if something broke, you didn’t just go buy a new one. This example is a testament to that fact as the handle has seen a period repair or two, of which remain stable throughout. This pistol, with all of its character, would make a wonderful centerpiece in a display and inspire some old-fashioned storytelling.