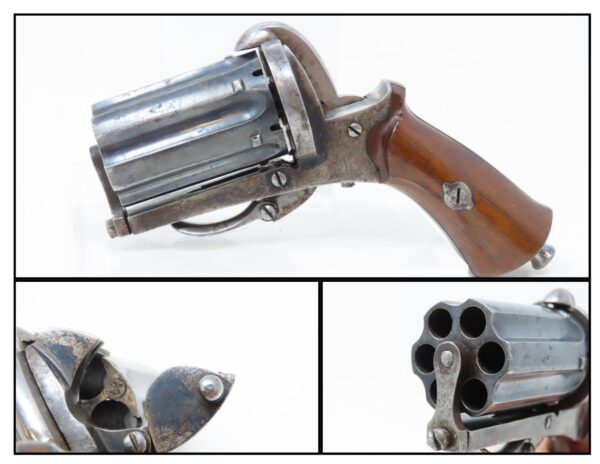 Here we present an antique European Folding Trigger Pepperbox. This firearm was made in the 1880s likely in Liege, Belgium, known for centuries now as one of the foremost firearms capitals of the world. The pepperbox was invented in the 1830s and was intended for civilian use, but military officers often made private purchases for their own use. The design spread rapidly in the United States, the United Kingdom and other parts of continental Europe. It was expressly made for self-defense, giving the shooter 6 shots of 7mm without having to cock a hammer. This pistol is double action, with a cluster of 6 barrels that revolves with each pull of the trigger.

In 1830, notable gun maker and inventor Casimir Lefaucheux invented the pinfire cartridge and patented it in 1835 to become one of the first self-contained firearms cartridges. This very early design included a case with ball, powder and primer, but what made it different from what was to come later in cartridge development was the “firing pin” that projected out of the side of the case. It was this pin that was struck and detonated the primer inside. His son, Eugene, would build on Casimir’s invention, designing a pistol to take advantage of it. The hammer would be flat and smash down on the side of the cylinder, from which the pin of the cartridge would project. This revolver and pistol design would become prolific, especially in Europe throughout the 19th Century, being adopted by militaries, used by civilians and police, and even being sold for use during the American Civil War. Many makers made both licensed and unlicensed copies.

The overall condition is fine. Original blue preserved on the cylinder. Strong action. Good bores, semi-bright with spots of pitting. Fine grips with smooth, vibrant finish. Here is mighty little pepperbox that would have got the job done.