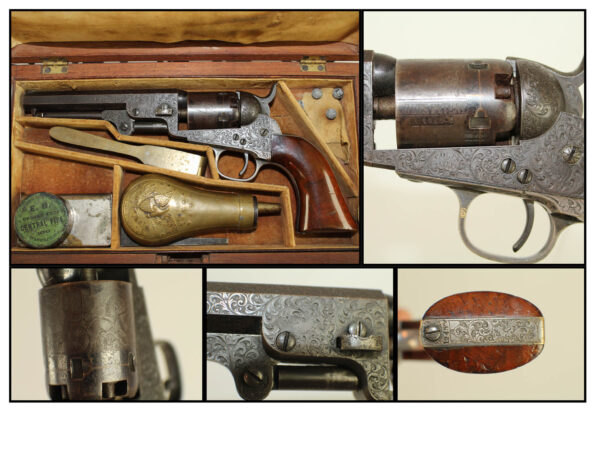 Authentic Pre-1899 Manufacture and therefore no licenses required for purchase or shipping. We are allowed to ship direct to door for any deliverable address worldwide.

Here we present an antique Colt 1849 Pocket Revolver, made in 1856. This 1849 Pocket Revolver was factory cased and engraved by the famous and trend-setting master engraver Gustave Young. Gustave Young was one of many German immigrants who came to the United States and worked in the firearms industry. However, Young’s talents were most assuredly in engraving and his style set him apart from his contemporaries. This influx of German engravers starting in about 1850 was perhaps the beginning of what R.L. Wilson has called the “golden age of arms engraving in America”. Other names such as Bodenstein, Helfricht, Nimschke, and several Ulrichs would also make their enormous contributions to the craft, imparting their Germanic influence and become legends as well. Wilson goes on to say that “Young is generally considered to have been the best arms engraver active in 19th Century America.” Young was “Colt’s chief engraving contractor from 1852-1869.”

In general, three themes distinguish Young’s work from that of others: 1) he tended to engrave each side of the hammer with a wolf’s head, 2) it is common that he added lateral punch dotting to the top curve of the hammer, and 3) his use of animal heads such as wolves, eagles and dogs in the overall body of his engraved pieces. While not always present on his work, all three of these motifs are present on this piece.

Another extremely intriguing aspect of this revolver is the personalized inscription on the back-strap reading “K. Heinzen”. Heinzen was not a very common surname in the United States in the 19th century and remains uncommon today. “K” could be the first initial to many names, however, considering the date of manufacture, the immaculate engraving of Gustave Young, and this specific inscription, one name stands out among the rest: Karl Heinzen (1809-1880).

Heinzen was a German-born citizen who immigrated to the United States in 1849, fleeing Europe as one of the German Forty-Eighters who helped to organize one of the many revolutions in Europe in 1848. While living in Louisville, Kentucky, he founded a paper called Der Pionier, which he then moved to Boston, Massachusetts, in 1859. Heinzen was the editor of the paper and an author of books and pamphlets. Heinzen’s primary platform consisted of Abolitionism and equal women’s rights, among others. In fact, he was a leader of the Bund Freier Manner (League of Free Men, a group of German “radicals”) and, in March of 1854, was instrumental in the crafting of the “Louisville Platform”, a manifesto of sorts meant to rally people around a new “progressive” political party and agenda. The group and their declaration were very critical of the United States, were anti-clerical, anti-isolationist, and advocated for the abolition of slavery, equal rights for blacks and women, easier paths to citizenship, among other things. The publication of the Louisville Platform in 30 or more newspapers around the United States left all but a very small minority unscathed from such an attack on various principals, religion, culture and government. As a result, tensions continued to rise and contributed to the Bloody Monday Riot on election day in Louisville, August 6, 1855.

Further evidence that this gun was specifically inscribed to Karl Heinzen is that another Gustave Young engraved Colt 1849 Pocket Revolver is known to have been inscribed to fellow abolitionist and women’s right activist Stephen Symonds Foster (1809-1881). That gun was made in 1858. Foster and his wife, Abigail “Abby” Kelly Foster (1811-1887), were not only activists but also used their farm as a station in the Underground Railroad. The Fosters and Heinzen had several high-profile acquaintances in common, such as Wendell Phillips (abolitionist lawyer and activist) and William Lloyd Garrison (editor of the Boston abolitionist paper The Liberator). Together in 1864, they all campaigned for John C. Frémont’s second run for President of the United States in the 1864 election, and participated in the Republican convention in Cleveland in the same year. These abolitionists were familiar with the violence with which their ideas were met, so it is of no surprise that gifts of these sorts were made.

This specimen is in fine condition. The choice burl walnut grips are in excellent condition, showing very little handling and almost all the original varnish. 95+% of the original silver finish remains on the trigger guard and back-strap. Some of the original blue remains on the barrel, forcing cone and cylinder. The stage coach hold-up cylinder scene is excellently preserved and completely visible. All markings are clear, engraving impeccable, typical of Young’s work. Bore is fine. Action is excellent. All numbers match.

This revolver comes complete with an original walnut case. Yellow velvet lines the interior. Case contains accoutrements including the key to the lock, Colt’s Patent bullet mold, powder flask with the United States Great Seal, a nipple wrench, a tin of percussion caps, some lead ball and another more unique percussion cap container.

Barrel is 5 inches in length.

The bore is in very good plus, shiny condition with just a small spot of pitting, and the firing mechanism is excellent.

Ancestry Guns considers all of our antique firearms as non-firing, inoperable and/or inert. Title 18, U.S. Code, Section 921(a)(16) defines antique firearms as all guns made prior to 1899. This law exempts antique firearms from any form of gun control or special engineering because they are not legally considered firearms. No FFL, C&R, or any license is required to posses, transport, sell or trade antique guns. All firearms sold by Ancestry Guns that were manufactured prior to 1899 are considered Antiques by the US BATF (United States Bureau of Alcohol, Tobacco & Firearms). Therefore, all of Ancestry Guns' antique guns may be shipped to all US States and most nations around the world.

Free shipping. Authentic Pre-1899 Manufacture and therefore no licenses required for purchase or shipping. We are allowed to ship direct to door for any deliverable address worldwide.