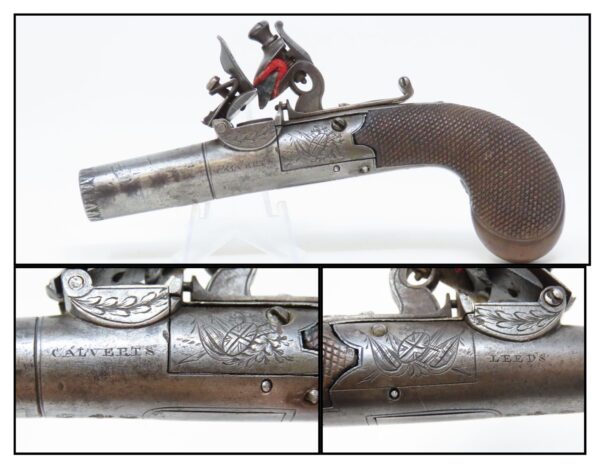 Here we present an antique T. W. Calverts of Leeds Flintlock Pistol, made circa 1810 in Leeds, Yorkshire. This pistol is a crisp round-framed pocket pistol by Calverts of Leeds with a round turn-off barrel engraved with a band of foliage at the muzzle. It has a beautifully engraved box-lock action fitted with a sliding safety catch and is signed on one side of the breech ‘CALVERT’ and ‘LEEDS’ on the other. The underside of the barrel is stamped with Pre-1813 Birmingham proofs and the gunmakers mark. The action is decorated with a stands-of-arms along with a bag shaped walnut butt, cut with deep checkering.

This self-defense pistol would have been most at home in the pocket of anyone in the busy city of London during the tumultuous times of the early 1800s. The “Pocket Pistol” name says it all. They were the “Saturday Night Specials” of the 16th-18th century. Before the Deringer, they were “Gentleman’s” or “Muff Pistols”, typically, a smaller pistol that was easily concealed. They were favored among the gentry and women because of these traits. Men would carry them concealed in a waistcoat pocket and women would hide them in a hand muff. It was of course, made primarily for self-defense, and very well would tell stories if it could. Much happened in Britain, in its colonies and abroad during this period. Its .50 Caliber manstopping bore would have been very intimidating if by chance you were on the receiving end.

The overall condition is very good. The action is strong all around. The bore is in good shape for its age. Sharp checkering has been maintained on the grip. The frame sits firmly against the handle. A panoply of arms is engraved on both sides of the frame. “LEEDS” can be read on the right barrel with “CALVERTS” on the left. Here is a fantastic flintlock pistol to collect and display!