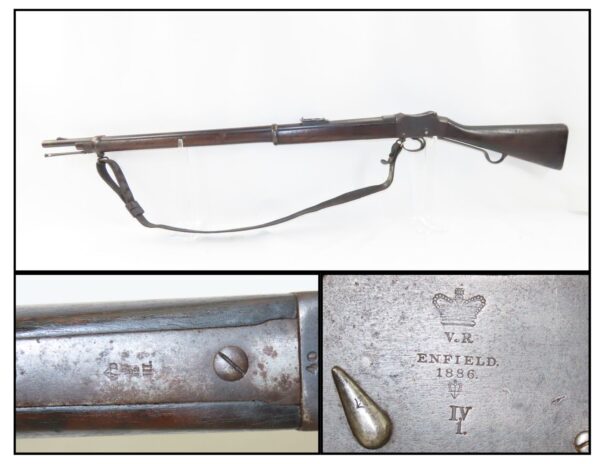 Here we present an antique Enfield Martini-Henry Mark III No. 1 Single Shot Falling Block Military Rifle made circa 1886 with a production run between 1871 and 1889 for the Mark I through the Mark IV with somewhere between 500,000 and 1,000,000 produced. During this time, production of the Mark IIIs exceeded 95,000 with orders for the New South Wales Government totaling 6,500 examples and Canada 5,000.

The first iteration of the rifle came about in 1871 and was adopted by the British Army to replace the Enfield Snider Breech Loading Rifles that were being phased out. The action is based on the patent by American and Boston native Henry O. Peabody, which was improved by Swiss inventor Friedrich von Martini. The new polygonal barrel rifling was the design of Scotsman Alexander Henry. This is where the rifle derives its name. Martini–Henry variants were used throughout the British Empire for 47 years. Like other British weapons, the Peabody-Martini-Henry saw action all over the world, and most famously in the Zulu Wars in Africa.

The overall condition is very good. Original finish. Robust action. Bright bore with sharp rifling. The stock is solid with and average amount of wear. Clear markings, as expected this example is littered with proof marks. The rear of the butt stock on the right side has a roundel marked for Rawalpindi, the site of a major arsenal and military center. The trigger guard is hand engraved. The leather sling is in good shape. A neat piece of British and Indian history!