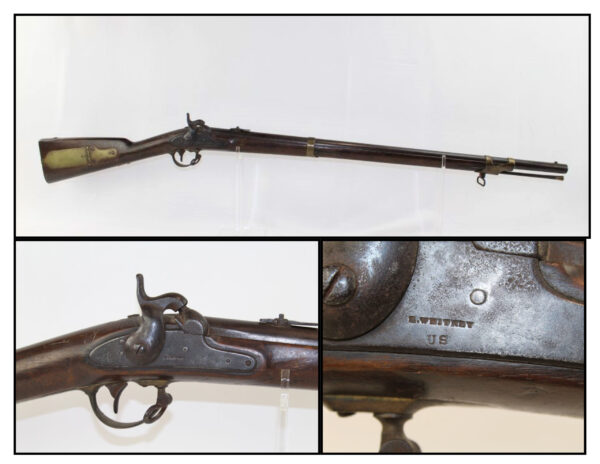 Here we present an antique U.S. Model 1841 Percussion Rifle-Musket, made on contract by Eli Whitney’s Whitneyville or Whitney Arms Co. in New Haven, Connecticut in 1854. Only 26,500 were produced by Whitney. The Mississippi Rifle is so called because its service life included the Mexican-American War, during which Jefferson Davis (future president of the Confederacy) led his Mississippi troops, who carried and favored the rifle. It was a rugged and reliable weapon.

The Model 1841 was originally made in .54 caliber, but in the late 1850s a number were arsenal reconfigured to a larger caliber. Obviously the M1841 was worth converting. Normally, a rifle that is converted is not worth quite as much, but this one bucks that trend, probably due to its use by both sides during the American Civil War. Government arsenals that were in the Confederacy at the time of the rebellion had a number of these in them.

This one features “US” markings throughout as well as the two leaf rear sight.

The overall condition is very good. The iron parts have a dark patina. The markings are clear. The walnut stock shows the expected handling marks of a 160 year old military rifle-musket and remains solid. The bore is dark with good rifling. The action is excellent. Own the musket considered most handsome by many, made by Eli Whitney’s company!