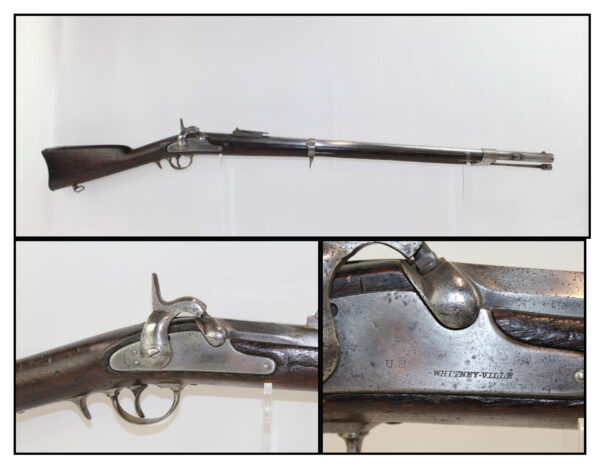 Here we present an antique Whitney US Model 1861 Plymouth Rifle-Musket, made in 1864. Only 10,000 of these were contracted for in July of 1861, just months into the American Civil War. The design was heavily influenced by the French Model 1846 Carabine a Tige and was further developed by American Admiral John Dahlgren, who was Commander of the Navy Ordnance Bureau in the years prior to the war. This was a robust rifled musket optimized for ships to board or repel boarders as well as for use by Marines in amphibious engagements. It featured a .69 caliber bore with 1000 yard rear sight for volley fire at approaching vessels and a long saber bayonet for face to face combat.

Fascinatingly, in addition to their Civil War history, about 500 of these muskets are known to have been purchased in 1943 by the United States Office of Strategic Services, or OSS as it is more commonly known, to be distributed to resistance fighters. Yes! These muskets were indeed purchased to arm islanders in the South Pacific against the Japanese in the middle of World War II! There is also evidence that these were indeed issued to the islanders as well, unlike other schemes dreamt up by the OSS and similar departments.

The overall condition is very good. The original bright finish has a nice gray patina. The markings are clear. The walnut stock shows use and remains in great condition. The bore is clean and well-rifled. The action is excellent. Here is a Civil War musket with a neat tie to WWII!