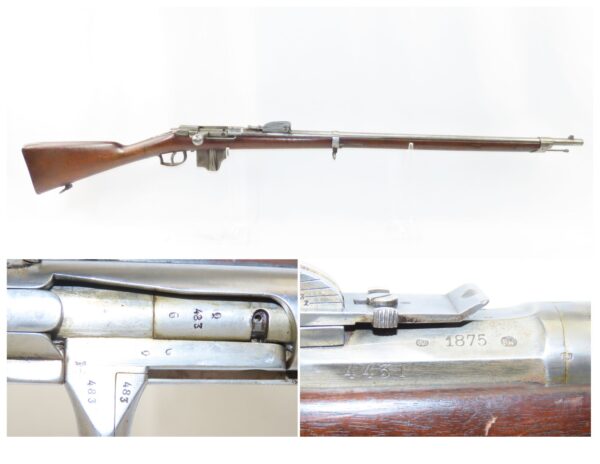 Here we present an antique Dutch Beaumont-Vitali Model 1871/88 Bolt Action Infantry Rifle, originally made in 1875 in the Netherlands. This is a unique opportunity to be able to collect an antique rifle that was used in the Great War, or WWI as most call it today. Initially designed by Edouard de Beaumont, this rifle led an interesting life with many updates in the nearly 50 years of service. It began life as a bolt action, single-shot, black powder rifle, adopted in 1871 by the Netherlands. This period of the late 19th Century, as well as the beginning of the 20th, was characterized by rapid advancement in firearms technology. This rifle was to undergo several updates as the countries of Europe adopted the latest rifles in quick succession, what could easily be termed an Arms Race. Instead of replacing the rifle altogether, the Dutch government decided to keep their armorers chronically busy updating these rifles.

First a safety was deleted, then a tweak to the cartridge necessitated a new, longer range rear sight, which was an optimistic 1800 meters. In 1888, the Dutch decided to make this a 4-shot repeating rifle with the addition of an Italian Vitali box magazine and magazine disconnect, hence the second date in its Model designation. This rifle would have seen service as late as World War I, though smokeless powder rifles had been in serious use for several decades.

The overall condition is very good. Bright finish. The numbers match. The action is excellent. The bore is bright with sharp rifling. The stock is very nice and solid. A great example of this early bolt action rifle from the Netherlands!