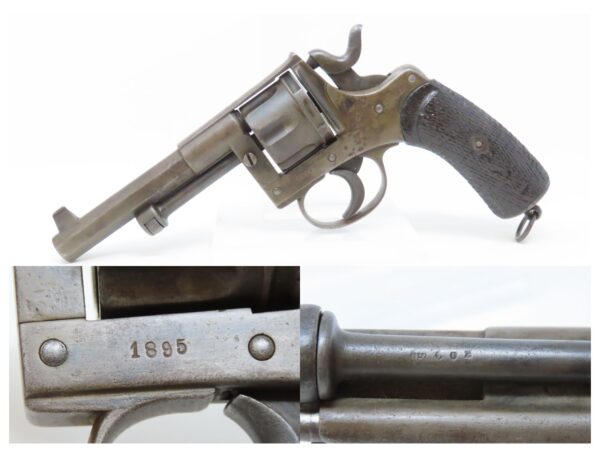 Here we present an Antique Dutch Model 1891 Military Revolver chambered in 9.4mm, made in 1895. Most of these revolvers were made at the Pyrotechnische Werkplants factory in Surabaya, Java. This revolver was developed by the East Indies Small Arms Arsenal and initially manufactured by JFJ Bar to the design of Captain F.W.H. Kuhn in Luttich as the side arm of the KNIL (Koninkliik Nederlandsch-Indisch Leger – Royal Dutch East Indies Army). The Model 1891 as it is known was entered into service in 1895, the year this revolver was manufactured. It is estimated that the initial production totaled approximately 3754 revolvers and were issued to the Dutch armed forces and Police that were deployed in the East Indies.

These guns used the 9.4mm round that saw its beginning in the early Nagant Rolling Block double barrel police pistol, and the Nagant brothers had a lot to do with the development of the early Dutch Military revolvers. The 9.4mm round was popular with the Dutch, although Nagant and everyone else moved to other calibers, and eventually this caliber became synonymous with the Netherlands.

The Model 1891 was phased out for use in the Colonial Army somewhere around 1927 being replaced by the M11. Even then, the M1891 stayed on in Police service. Overall, the Model 1891 was still in regular use well into World War II, and many of these revolvers were captured by the Japanese when the KNIL surrendered in 1942 and subsequently use by them. Many of these revolvers the “recaptured” by allied forces, primarily American and Australian, and taken home as souvenirs.

The overall condition is very good. Original patina. The action is excellent. The bore is clean with good rifling. Cylinder has British black powder proofs on the back. The grips are solid with apparent wear and a clear coat. A neat Dutch antique revolver!