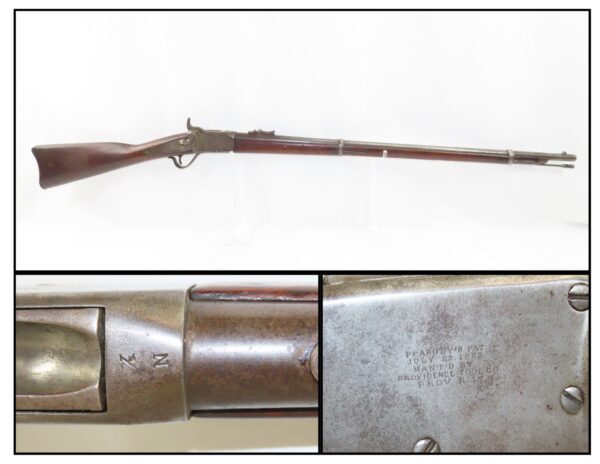 Here we present an antique Connecticut Militia Marked Peabody Rifle, made by the Providence Tool Company in Providence, Rhode Island. It is one of some 112,000 carbines and rifles produced by the company between 1866 and 1871. Henry Peabody developed this sturdy, single-shot, breechloading rifle during the American Civil War and it compared very favorably against the competition. It might have been adopted by the U.S. military had the conflict not ended when it did. Instead, the federal government decided to adopt the Allin Trapdoor Conversion of the ubiquitous Model 1861 Muskets that were in surplus after the war. Several states, such as Massachusetts and Connecticut, purchased these rifles for their militias.

This rifle utilizes a trigger-guard that acts as a breech lever to lower the breechblock for top loading of the metallic round. It also features a back action style lock with a large side hammer. It features a very neat rear sight that is capable of five elevation adjustments! There are no sling swivels on this model, which is correct for a rifle that wasn refurbished. This specimen has a lock marked with “PEABODY PAT./JULY 22 1862/MAN’F’D BY/PROVIDENCE TOOL CO./PROV. R.I.” Single letter inspection marks are found throughout. The bottom of the stock features a small tag that is marked “CONN/188”. There are also unit/rack markings on the butt plate tang and the comb.

The overall condition is very good. This example has a nice strong action. The bore is in good shape with very nice rifling. The walnut stock is solid, though there is a thin crack both on the left side of the wrist (at the bottom of the side view) which is stable and unmoving, and a sliver in the left side of the fore stock between the barrel bands. This is a very nice example of a mid-19th Century Connecticut Militia rifle!