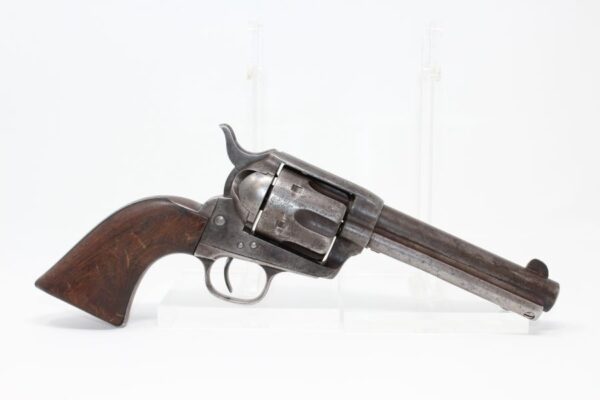 Here we present an antique Colt Black Powder Frame Single Action Army Revolver, manufactured in 1883 in Hartford, Connecticut. The Colt “Peacemaker” was introduced in 1873 and has become one of the most iconic firearms in all of history, thanks to its widespread use by the U.S. military, civilians and, more recently, in Western films.

The overall condition is very good. There remain traces of blue finish in the cylinder flutes and around the barrel that have turned dark with age. Case colors are dark but visible on the frame. Markings are clear. Serial numbers match. The grips is in good shape with honest wear. The bore is in very good shape with strong rifling. The action is excellent. Here is a fantastic Colt Single Action Army Revolver from 1883 in the caliber that it made famous!

Barrel is 5 inches and round