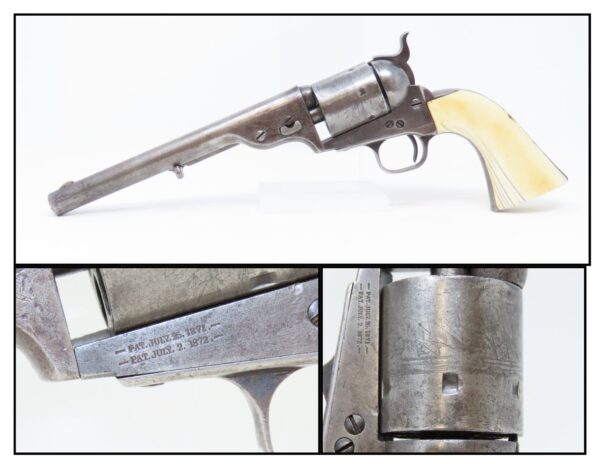 Here we present an antique Colt Model 1871-72 “Open Top” Single Action Revolver, made in 1872 in Hartford, Connecticut with a production run between February 1872 and June 1873 and a total of only 7000 revolvers manufactured. The Colt 1871-72 Open Top was new, innovative and practically obsolete the day it was introduced. In Colt’s haste to introduce a new self-contained cartridge loading revolver as soon as possible after the expiration of the Smith &Wesson Rollin White patent, the company chose to build a model based on as many existing parts as possible, and the majority of those parts came from the well-respected 1860 Army. To make the Open Top, Colt used 1860 Army frames that were fitted with an all-new barrel and cylinder designed by Charles B. Richards and William Mason. Both men were not only instrumental in designing the Open Top, but they developed an entire post-Civil War line of metallic cartridge conversions using up all of Colt’s remaining percussion pistol inventory, from the 1849 pocket models to the 1860 Army. Mason was Colt’s superintendent of the armory, and in 1872 he designed and patented the now-legendary Peacemaker. But just before that came the Open Top, Colt’s first cartridge-firing six-shooter. In 1871 the U.S. Ordnance Department was considering the cartridge-loading Open Top as a replacement for its Civil-War-era revolvers but decided against it.

As the late Colt historian and author R. L. Wilson noted in The Book of Colt Firearms “Bearing in mind the rejection of the Open Top by the U.S. Ordnance Department, Colt’s engineers, particularly William Mason, worked feverishly to develop the successor to the Open Top … The Single Action Army was a natural evolution by combination of the best design features of the percussion, conversion and Open Top models with the necessary alterations dictated by military needs and the properties of the metallic cartridge ammunition. In 1872, the Colt Peacemaker was adopted by the U.S. Army, following a vigorous and highly competitive series of tests.” Thus, the Colt Open Top’s fate was sealed!

The overall condition is very good. The ivory grips on this one are in great shape. The cylinder scene is intact. The action is very strong. The bore is in good condition with nice rifling. The barrel was cut to 4-1/2 inches during the period of use, then at some point stretched back to 7-1/2 inches. The original barrel shows left-hand twist and the stretched portion right-hand twist. This is a great example of one of the evolutionary links from the percussion Colt, such as the 1851 Navy and the 1860 Army, to the up and coming 1873 Single Action Army. It would still make a wonderful mate to a Henry or Winchester 1866.