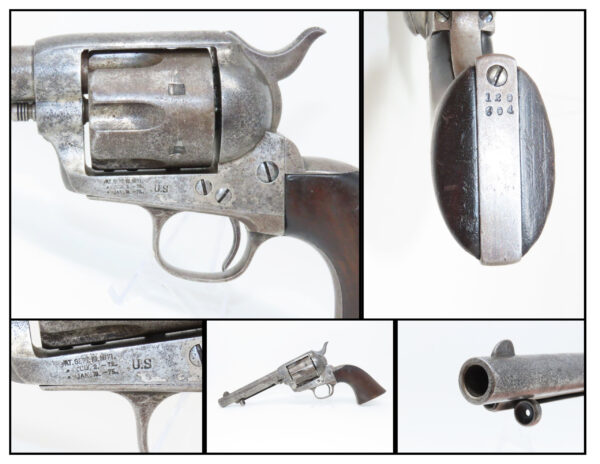 Here we present an antique Colt Single Action Army Revolver “Artillery Model”. The Artillery or Springfield Armory Model of the SAA is one of the most interesting of the Colt SAAs. This is revolver that was originally manufactured by Colt in 1885 in Hartford, Connecticut, inspected by the Ordnance Department inspector, shipped and issued to the cavalry. After a period in the service, it was then shipped back to either Colt or Springfield Armory for a complete re-haul to make it serviceable for the field yet again (c.1895-1903). This included cutting the barrel to 5-1/2 inches. Only about 17,000 of these re-armored guns were completed. In all but the rarest variant of the already scarce Artillery Model, the serial numbers will be mixed as various worn out parts were replaced by those of varying number. Many of these saw action in the Spanish-American War and the Philippine-American War and who knows what they had seen before or after that period. They are a fantastic piece of history.

This specimen has the “U.S.” property mark on its frame. The numbers are mixed and various government inspector marks are found throughout, most notably Henry Nettleton on the top of the backstrap when he inspected the grip frame in 1885, and “DFC” for David F. Clark on the frame. Possibly “RAC” for Rinaldo A. Carr on the barrel along with “P” proofs on the barrel and cylinder.

The overall condition is good. The action is strong. The bore is good. The grips are solid and remain in good shape.  Here is a US marked Colt Single Action Army Artillery Model that’s in good shape with history from the Indian Wars, Spanish-American War, Philippine-American War & beyond!