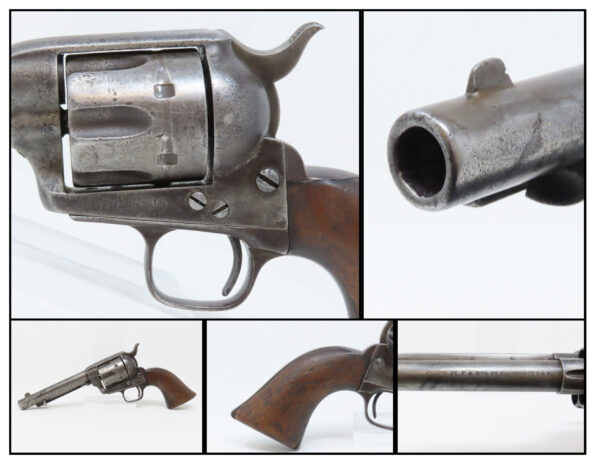 Here we present an antique Colt Single Action Army Revolver Artillery Model, with the frame made in 1891. The Colt Single Action Army, or SAA, is a classic “six shooter” that is a worldwide icon of the United States of America and the Western Frontier. Wielded by both the worst of men and the best, the famous Single Action Army is also well-known as the Peacemaker. Introduced in 1873, the basic design remained, with a few interruptions, in production and is still manufactured today by Colt and other companies.

The overall condition is good. The action is strong. The bore is dim. The left side of the frame is marked “US”. The frame is marked “R.A.C.” for Sub-Ordnance Inspector Rinaldo A. Carr and the letter “P” is marked under the barrel. As with most all Artillery Models, the numbers do not match as it was arsenal refurbished in the late 19th Century for further service into the 20th Century. Here is a US marked Colt Single Action Army Artillery Model that’s in good shape with history from the Indian Wars, Spanish-American War, Philippine-American War & beyond!