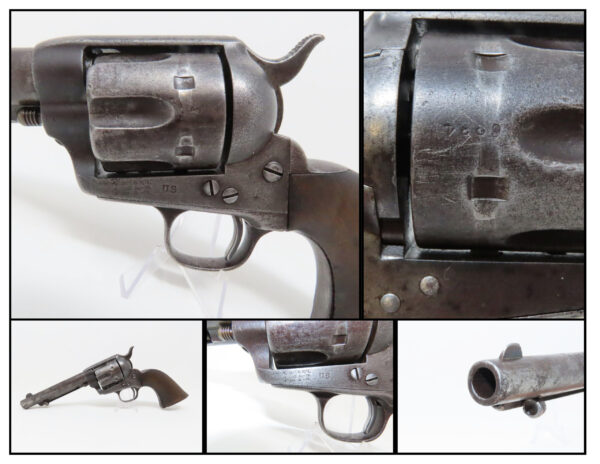 The Artillery or Springfield Armory Model of the SAA is a period (1895-1903) armory or factory refinished gun to extend U.S. military service. Only about 17,000 of these refurbished guns were completed. In all but the rarest variant of the already rare Artillery Model, the serial numbers will be mixed.  Many of these saw action in the Spanish-American War and the Philippine-American War.

The overall condition is fair. There is extensive weathering throughout with strong traces of blue finish on the barrel. Markings are mostly legible. The numbers on this Artillery do not match as it was arsenal refurbished in the late 19th Century for further service into the 20th Century. The grips are similarly weathered and remain solid. The bore is in good shape with mostly semi-bright surfaces and very good rifling with a couple small patches of roughness. The action remains excellent, a testament to the durability of this legendary revolver. Here is a US marked Colt Single Action Army that shows how hard it was used, an awesome relic from the Indian Wars, Spanish-American War, Philippine-American War & beyond!