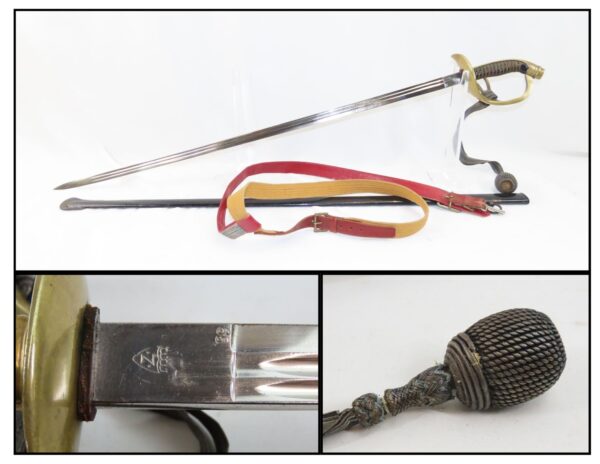 With “In/Treue/fest” ETCHED in Blade!

Here we present an Antique Clemen & Jung Bavarian Cuirassier’s Sword, manufactured in Solingen circa the mid to late 1800s. Clemen & Jung was founded and registered with the Chamber of Commerce in Bavaria in 1860. They produced swords, sabers, rapiers, and daggers up until the destruction of their factory in 1944 during World War II.

This nice Cuirassier’s sword likely has much history behind it. Cuirassiers were cavalry equipped with a cuirass, sword, and pistols. Cuirassiers first appeared in the mid-to-late 16th century Europe as a result of armored cavalry, such as men-at-arms and demi-lancers, discarding their lances and adopting the use of pistols as their primary weapon. In the later part of the 17th century the cuirassier lost his limb armor and subsequently wore only the cuirass (breastplate and backplate), and sometimes a helmet. By this time, the sword or saber had become his primary weapon, with pistols relegated to a secondary function. Cuirassiers achieved increased prominence during the Napoleonic Wars and were last fielded in the opening stages of World War I (1914-1918). A number of countries continue to use cuirassiers as ceremonial troops.

This example’s etched blade reads “In/Treue/fest”. In Treue fest, which is German for “steadfast in loyalty; firm in fidelity”, was the motto of the Kingdom of Bavaria (1805–1918) and of its Wittelsbach rulers.

The overall condition is very fine. Bright etched blade with minimal to no dings. Solid hilt all around with a tight wire wrap and leather. The scabbard is in fine shape with a nice belt/sling.