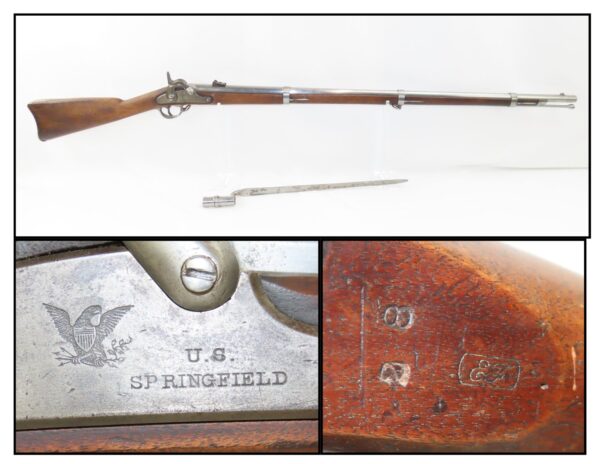 Made at the SPRINGFIELD ARMORY Circa 1864 with BAYONET

Here we present a Springfield U.S. Model 1863 Type II Rifle-Musket, manufactured at the Springfield Armory in Springfield, Massachusetts circa 1864.

The Model 1863 was only a minor improvement over the Springfield Model 1861. As such, it is sometimes classified as just a variant of the Model 1861. The Model 1863 was produced in two variants. The Type I eliminated the band springs and replaced the flat barrel bands with oval clamping bands. It also featured a new ramrod, a case-hardened lock, a new hammer, and a redesigned bolster. The Type II is sometimes referred to as the Model 1864, but is more commonly referred to as just a variant of the Model 1863. This version re-introduced band springs, replaced the clamping bands with solid oval bands, and replaced the three leaf rear sight with single leaf sight. A total of 255,040 of these were manufactured from 1864 to 1865.

At the beginning of the American Civil War, the South and North both relied heavily on imported rifles. It wasn’t until the North adopted the .58 Caliber Springfield musket that the average infantryman would evolve into an accurate marksman and effectively turn the tide of the war. The M1861 is representative of the “everyman’s” rifle during the war. About 1.5 million rifle-muskets were made in the U.S., over 800,000 of which were made by the Springfield Armory. This was the last hurrah of the rifle-musket as arms development and tactics rapidly advanced during the short period of the American Civil War. Nevertheless, the 1861 represented new technology as it was made for use with the Minié ball, a hollow based, conical projectile that was small enough to quickly push down the muzzle of a rifled barrel and expanded to create a good gas seal unlike a solid, round ball. This musket also featured, for the first time in the arms market, static iron sights. Almost immediately after the war, the US military switched from the old muzzle loading type weapons to the newer breech loading rifles, bringing an end to the musket as a standard frontline firearm in American history.

“US” is tamped on the butt plate tang. Both the lock and barrel are dated “1864”. The number “28” I stamped on both sides of the stock. The cartouche on the left side of the stock reads “EJ”. A hand carved “S.H.” can be read on the left side plate. “US” marked bayonet. The bayonet collar screw is absent but the collar is still present.

The overall condition is very good. The action is strong all around. The bore is in nice shape with good rifling. The stock is smooth and solid with strong markings. The ramrod is a replacement. This is a fantastic Springfield Civil War infantry rifle-musket that will make a great centerpiece.