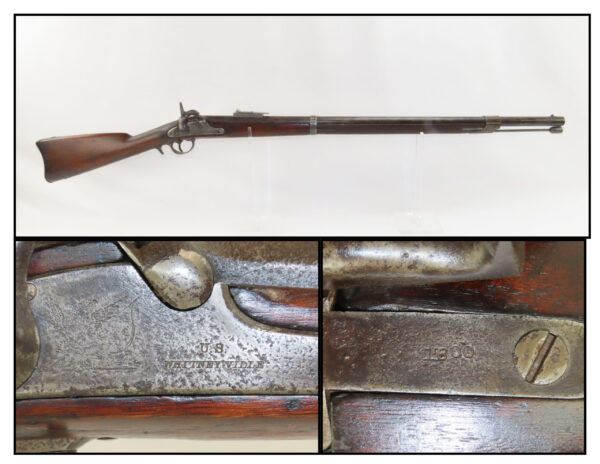 Here we present an antique Navy Contract Whitney Model 1861 “Plymouth Rifle” percussion rifle-musket made in New Haven, Connecticut, in 1863. Eli Whitney Jr. and his family legacy, Whitneyville Armory, played a large role in providing small arms to the Union during the American Civil War. In July of 1861, Eli Whitney received a government contract to produce 10,000 of these Navy rifles for the Ordnance Department. Named after the USS Plymouth, a naval ordnance testing ship, this rifle was originally a rifled, .69 caliber muzzle loader that saw the majority of its service with the Federal Navy, though there are some cases of the Federal Army infantry outfits using this rifle. Marked between the hammer and bolster is the spread-winged eagle over “US”. Forward of this is “WHITNEY/VILLE” with the date “1863” behind the hammer. The black walnut stock is similar to the M1861 rifle stock, except it is a bit bulkier. The barrel tang shows the number “1600”, which isn’t a serial number but was applied by Whitney to match up with the saber bayonet provided by the Collins Company of Connecticut. The bayonet and lug are missing/not included.

Fascinatingly, in addition to their Civil War history, about 500 of these muskets are known to have been purchased in 1943 by the United States Office of Strategic Services, or OSS as it is more commonly known, to be distributed to resistance fighters. Yes! These muskets were indeed purchased to arm islanders in the South Pacific against the Japanese in the middle of World War II! There is also evidence that these were indeed issued to the islanders as well, unlike other schemes dreamt up by the OSS and similar departments.

The overall condition is good. The action is strong and tight. The bore is dark. Replacement rear sight, ramrod, fore end, and nipple. Here is a great example of a Civil War Federal Navy musket from Whitney!