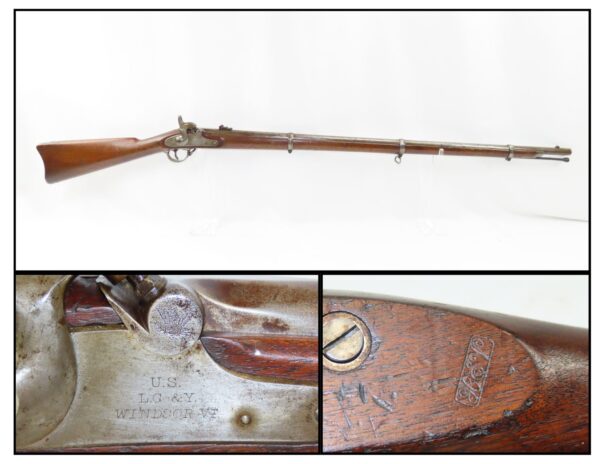 Here we present an antique Lamson, Goodnow, and Yale Contract Special Model 1861 Percussion Rifle-Musket, produced in 1864 in Windsor, Vermont. Production began in July of 1861 when the Civil War was getting started. The Union was still trying to make up for arms shortages and the destruction of Harpers Ferry Armory with production at Springfield, supplementing this with contracts with over 20 other contractors, like Lamson, Goodnow, and Yale, for rifle-muskets. This was a “special” version of the musket that Colt initially is thought to have designed (and produced as well).

The American Civil War raged from April 12, 1861 to May 9, 1865 in which roughly 50,000 Model 1861 muskets were produced by Lamson, Goodnow, and Yale for the U.S. government. Like the Springfield production of the Model 1861, their contract model could be considered the “everyman’s” infantry weapon.

The overall condition is very good+. Strong action. The bore is in very nice shape with strong rifling. Solid walnut stock throughout, with a clear cartouche on the left wrist: HEV for Henry E Valentine, an Ordnance inspector. “1864” dated barrel and lock. A superior example of a scarce and desirable contract Special Model 1861!