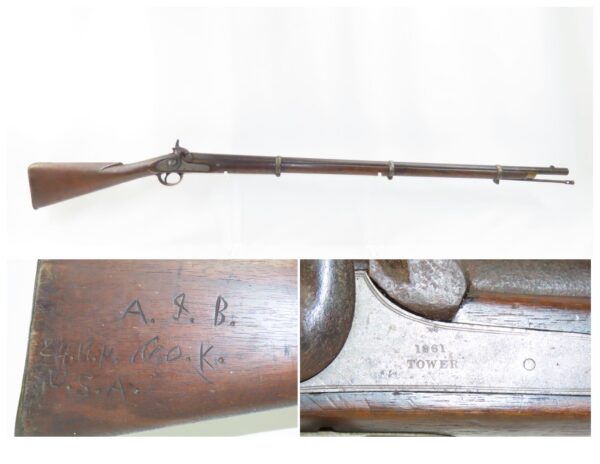 Here we present an antique Enfield Commercial Pattern 1853 Three Band Rifle-Musket, made in 1861 in England. The P53 was the British Military Ordnance Board’s choice for adoption as the primary long arm in 1853. It was considered the apex European military gun of that time, introduced by the British War Department after several studies to improve the calibers and the dimensions of the previous models. However, it kept the same general appearance of the earlier pattern 1851. The overwhelming majority of P53 Enfield Rifles were made by commercial gun makers in Birmingham and London under contract. This gun features steel barrel bands, and the ramrod tip is shaped with the characteristic jag slot.

The 24th New York Regiment, also known as the “Oswego County Regiment”, under the command of Colonel Timothy Sullivan was mustered in on July 2nd, 1861, and was an active regiment for the Union army seeing action at Rappahannock Station, Groveton, the 2nd Battle of Bull Run, Antietam, Fredericksburg, and Chancellorsville. On May 29, 1863, the 24th was mustered out at Elmira, New York, having lost 91 men by death from wounds and 31 by death from other causes.

After research, we believe this musket belonged to Major Andrew Jackson Barney. Barney enlisted with the Union Army at 32 years of age on May 7, 1861. He mustered in as Captain of Company “K”, 24th Regiment and was promoted to Major on January 3, 1862. Barney died in the 2nd Battle of Bull Run on August 30, 1862, and was buried at the Woodside Cemetery in Belleville, New York.

The Enfield 1853 rifle-musket was also used by both the North and the South in the American Civil War and was the second most widely used infantry weapon in the war, surpassed only by the Springfield Model 1861 Rifled Musket. The Confederates imported more Enfields during the course of the war than any other small arm, buying from private contractors and gun runners. It has been estimated that over 900,000 P53 Enfields were imported into America and saw service in every major engagement of the war.

The overall condition is good. Strong action (the nipple is worn down to the nut). The bore has been smoothbored, probably post-war. Solid stock with an average amount of wear. There is small crack just behind the lock that remains stable. On the right buttstock, “A.J.B./2.4.N.Y.Co.K./U.S.A.”, is hand inscribed. “1861” dated lock. The barrel tang screw is an old replacement and is a bit to long, as it does not fully seat.