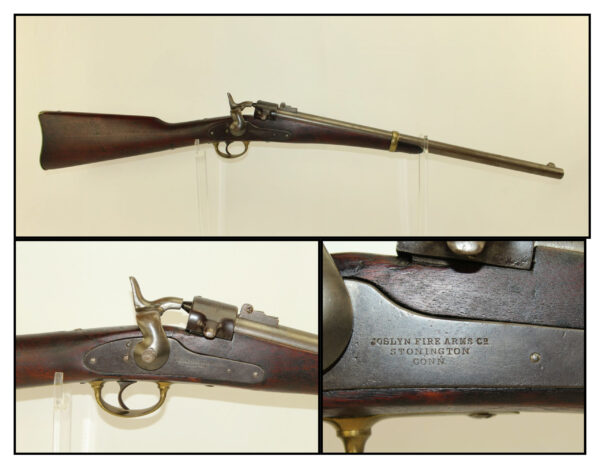 Scarce 1 of 3500 Carbines Made During the Civil War!

Here we present an antique Joslyn Model 1862 Civil War Cavalry Carbine, made circa 1863 in Stonington, Connecticut. The Joslyn Carbine Model 1862, also referred to as the First Model, was a cavalry weapon that used a pivoting breechblock system invented and patented by Massachusetts gun designer Benjamin Franklin Joslyn in 1855, who was the holder of over 25 firearm patents. Under his June 1862 contract, the Joslyn Fire Arms Company produced their first rimfire model carbine now designated as the “Model 1862”. Designed for field use with Federal horse soldiers, the Joslyn Carbine fired a standard Spencer rimfire cartridge of .52 caliber.

Approximately 3,500 Model 1862 carbines were made, 2,200 of which the U.S. Government purchased during the Civil War. They were widely issued to the Union cavalry units, including the 4th and 8th Indiana, 19th New York, 13th Tennessee, 9th Pennsylvania, 3rd West Virginia, 1st Nebraska, 2nd Wisconsin, 1st Nevada, and 11th Ohio. As a result of his success with the carbine, the federal government ordered 3,000 of his breech-loading actions in order to build the U.S. National armory made breech-loading rifles. These were made for the proprietary cartridge called the 50-60-450 Joslyn Rimfire. This pre-dates the Allin conversion and some of these 3,000 rifles are suspected to have been issued and used just before the end of the American Civil War.

The overall condition is good. The iron parts have a gray patina. The markings are clear. The numbers match. The walnut stock still bears a good inspector cartouche right above the sling ring. The stock has been repaired around the lock and breech of the receiver. The bore is in good shape with strong rifling. The action is excellent. Own of piece of Civil War history!