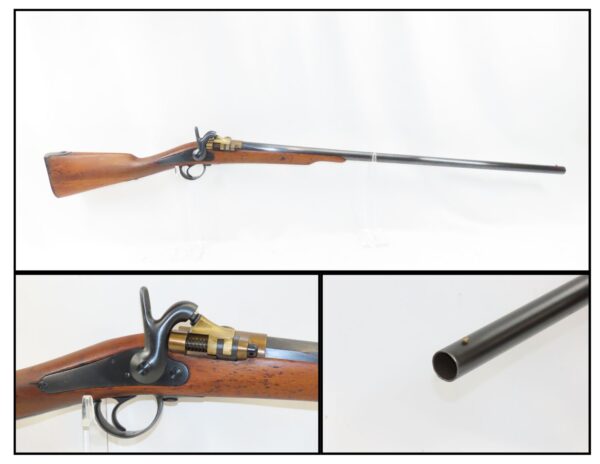 “An admirable Boy’s or Farmer’s Gun”

Here we present an Antique Tabatiere Type Breech-loading Shotgun, frequently known as “Zulu”. The origin of this shotgun is an interesting one. Originally, many of these were 1857 French percussion muskets. Soon after they converted these muzzleloaders to breech-loaders, using the Snider system, so that they became known as the System 1867. They were used in the Franco-Prussian War in which the French were defeated. By the end of the war, the French decided that the converted muskets were unacceptable and once again updated their arsenals, this time with the 1874 Gras. Being that there was no military use for these surplus guns as they were, a Belgian gunmaker, Bertrand & Fils, had the idea to convert these (for a second time) into shotguns.

The name “Zulu” was probably inspired by the British Colonial Zula War of 1879, around the time period where sales of these guns was at its highest. Imports to the United States were good throughout the end of the 19th Century, until domestic production of single shot shotguns caught up with competitive options. Companies like E.C. Meacham in St. Louis and Sears & Roebuck in Chicago both sold these and marketed them as “an admirable Boy’s or Farmer’s Gun, and fills a long-felt want for a good breechloader at a moderate price. Uses regular brass or paper shells.” This as the Western portion of the United States was still quite unsettled and need for affordable workhorse firearms was high.

The overall condition is good. Strong action. The bore is semi-bright, smooth with pitting at the breech. The stock is solid/stable with less than expected wear (crack to the rear of the lock and repair plug on the right buttstock).