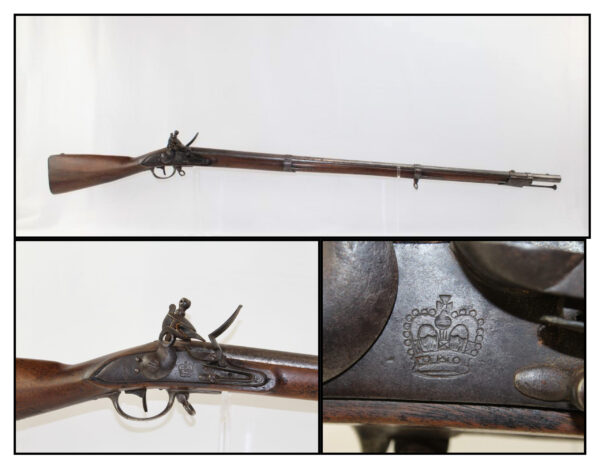 Here we present an antique Charleville Type Flintlock Militia Musket, manufactured circa 1823. It was designed very closely patterning the French “Charleville” Flintlock Musket that was used to by the colonists against the British during the American Revolutionary War. The Charleville smoothbore musket, garnering its name from the main arsenal in Charleville, France, was the standard issue flintlock musket for the French Empire throughout the 18th and 19th centuries. The original musket was first delivered in 1717, and over the next several decades, saw many revisions and improvements, making them a lighter, better fighting musket. It is estimated that tens of thousands of Charleville muskets were produced throughout the 1700’s. The Charleville musket served in many conflicts, including the French Revolution, the Napoleonic Wars, the American Revolution, and the War of 1812. In the United States, the Charleville was one of the arms given by France to fight the British, and it went on to become the basis of early American weapons manufacturing.

This is one such musket. The left side of the barrel bears various markings, including a “1823” date. The “P” and “M” markings are frequently found on militia muskets originating in New England. This one features a captured British lock marked “TOWER” at the tail with a British crown cipher in the middle. The inside of the lock is maker marked “W&S.R”.

The overall condition is very good. The iron parts have an even, dark patina. The markings are clear. The stock has been repaired at the butt stock and is in otherwise nice condition. The bore is smooth and dusty. The action is excellent. Here is a very neat flintlock militia musket from New England!