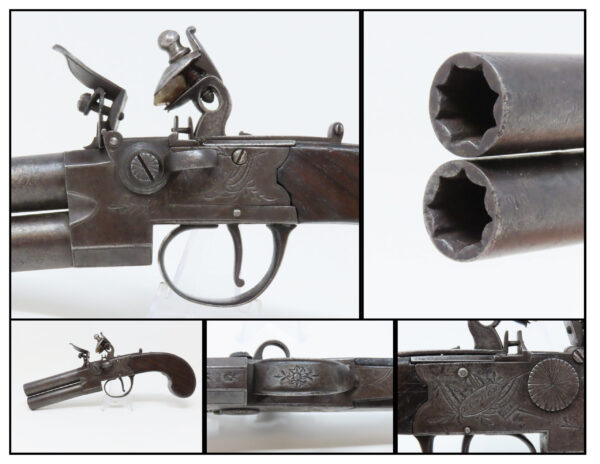 Manufactured by W&G CHANCE for the Indian & Trapper Trade

Here we present an antique W. & G. Chance Tap Action Over/Under Flintlock Pistol, made the 1790s in Birmingham, England by W.&G. Chance. W&G Chance was a British gunmaker who manufactured trade guns in the first half of the 19th century for Indian & trapper trade in addition to sales to the general public. Based out of Birmingham, many Chance firearms were shipped to the American Fur Company & later to Pierre Chouteau Jr. in St. Louis. For nearly 250 years, from the early 17th to the mid-19th centuries, the fur trade was a vast commercial enterprise across the wild, forested expanse of what is now known as the United States! In its day, this little two-shot over/under flintlock pistol would have been a very handy self-defense weapon to have around, being the next best thing to a repeater. This pistol was likely worn on one’s belt or carried in a coat pocket!

The overall condition is good. The action is strong and tight all around. The bores are dark from age. The frame is firmly affixed to the grips. The left lock reads “CHANCE & SONS” while the right says “LONDON”. The bottom of the barrel has English proof marks. Here is a prime example of a tap action flintlock pistol for collecting or display!