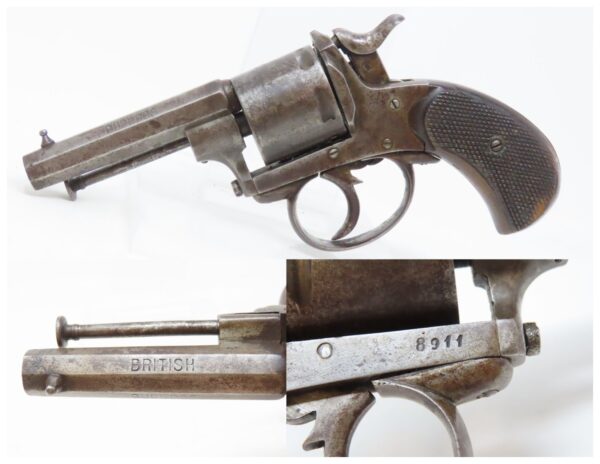 Here we present an antique Belgian “BRITISH BULLDOG” .38 Caliber Double Action Revolver, made circa the 1870s-80s in Liege, Belgium. The revolver was a small, sturdy, well-built self-defense weapon, ideal for potent conceal and carry in the era not long after the American Civil War and continuing into the 20th century.

The original British Bull Dog was a popular type of solid-frame pocket revolver introduced by Philip Webley & Son of Birmingham, England, in 1872, and subsequently copied by gunmakers in continental Europe and the United States, as is this Belgian example. It featured a 2.5-inch (64 mm) barrel and was chambered for .442 Webley or .450 Adams cartridges, with a five-round cylinder. Webley produced smaller scaled .320 Revolver and .380 caliber versions later, but did not mark them with the British Bull Dog name.

This revolver features a double action trigger and five shots of .38 caliber center fire. The barrel is marked “BRITISH / BULL DOG” and the grips are nicely checkered walnut hardwood.

The overall condition is good. Original patina. The action is functional and the cylinder indexes and locks up, but the trigger return spring is a bit weak. The bore is dim with very thin rifling. The grips are solid.