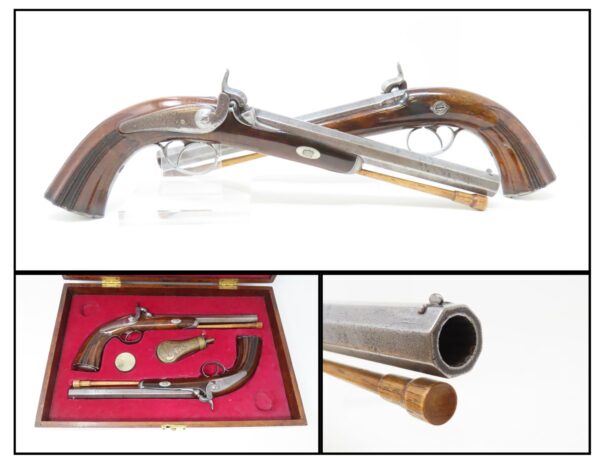 Here we present two antique French Percussion Dueling Pistols, made circa 1850 in Paris, France. Here are two fine examples of French craftsmanship. Both of these pistols are matching, feature beautiful engravings, and Damascus barrels. The stocks are carved and have a very nice grain. The pommels contain small compartments in which one could have kept caps.

Few names in European gunmaking are more famous than that of LePage, a multigenerational family of French gunmakers dating back to the beginning of the 18th century. By the mid-19th century, the LePage family was firmly entrenched in the French gun trade, with numerous relatives trading on the name of the two creators of the dynasty, those being Pierre LePage (1709-1783) and his nephew Jean LePage (1746-1834). Intermarriage of the LePage family with other notable French gunmaking families would result in the LePage family being intimately involved in nearly aspect of the French gun trade for well over a century.

One such LePage company by marriage was that of LePage-Moutier, a business based on the marriage of Henri LePage’s daughter to the French gunmaker Gilles Michel Louis Moutier (1810-1887). The firm was established in 1842 and remained in business under that name through 1868.

The overall condition of both pistols is very good. Strong tight actions. Both bores are clear and remain in good shape. Both examples contain a thin crack on the left side of the stock, opposite of the action, and hiding under the hammer. Wonderful twist barrels. Sharp floral engravings on the locks and hammers. The ramrods are replacements. The case is certainly old, but not period, in very good shape and contains a powder flask and cap tin.