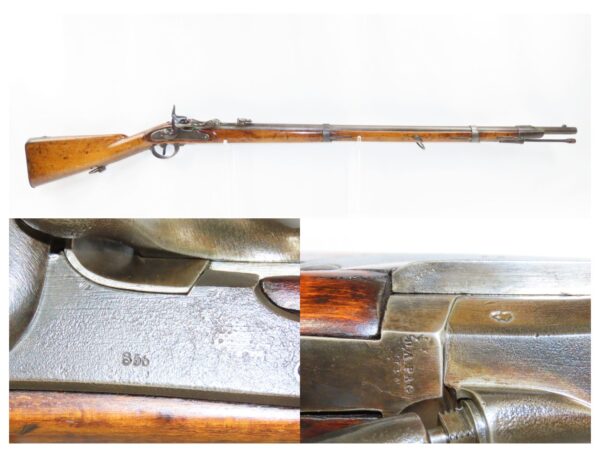 Here we present an antique Austrian Model 1854/1867 Wänzl Breech Loading Conversion Military Rifle made in 1856 and converted circa 1868 in Steyr, Austria. The Wänzl rifle was a breechloading conversion of the M1854 & M1862 Lorenz rifle. The Austro-Hungarian Empire used the Wänzl as their service rifle until they had enough M1867 Werndl-Holub rifles to arm the military. The rifle was a lifting-block breechloader chambered for the 14×33mm Wänzl rimfire cartridge. This example is stamped 856 on the lock plate indicating the original manufacture in 1856. It is also stamped “68” on the barrel, indicating conversion in 1868.

The Lorenz percussion rifle adopted in 1854 was conceived by Lieutenant Joseph Lorenz of the Austrian Army. In 1862 this rifle was revised slightly, with a different “Enfield-Style” lock plate, and more consistent manufacturing. In 1866 after losing the Austro/Prussian War having faced the superior Prussian Dreyse needle fire rifle the search started for new infantry weapon for their military.

This turned out to be the 1867 Werndl rolling block rifle personally selected by the Emperor Franz Joseph. The question remained of what to do with the vast inventory remaining of the M1854 and M1862 Lorenz rifles. This was solved with the 1867 introduction of the Wänzl conversion system that turned the Lorenz muzzle loader into a 14mm metallic cartridge breech loader. The Austrians converted a total of 70,000 Lorenz muskets to Wänzls.

The overall condition is very good. Weathered metal surfaces. The action is excellent. The bore is shiny bright with sharp rifling. The stock shows use and has been varnished. A neat trapdoor system breech loading rifle from Austria!