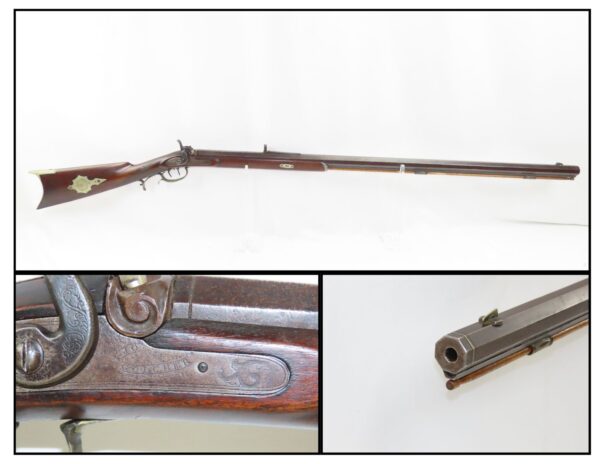 Here we present an antique Half Stock Percussion Long Rifle by Seidner, made circa the mid-19th Century with a Goulcher lock. Its stout octagonal barrel is in .41 caliber, large enough to take small to medium sized game or to defend the homestead against unwanted aggression. The top and side of the barrel are signed either “T.” or “J.” “Seidner”. There is some other small engraving on the barrel. The top flat of the barrel is drilled and tapped, possibly for a very early scope or different rear sight. The current rear sight is a buckhorn. Double set triggers. German silver hardware and a uniquely shaped patch box.

Rifle manufacture in the mid-to-late 19th Century was rapidly changing over from thousands of craftsmen all over the United States and on the Frontier making and selling their wares, to the large factories with standardized assembly lines and modern manufacturing techniques. Many makers’ names of the so-called Kentucky long rifles have been lost over time. This rifle is one such example.

The overall condition is good. Strong action. Nice bore with strong rifling. The stock is solid throughout and in very nice shape. This example has an even, smooth patina. A great example of a rifle that would have been found all over the American Frontier!