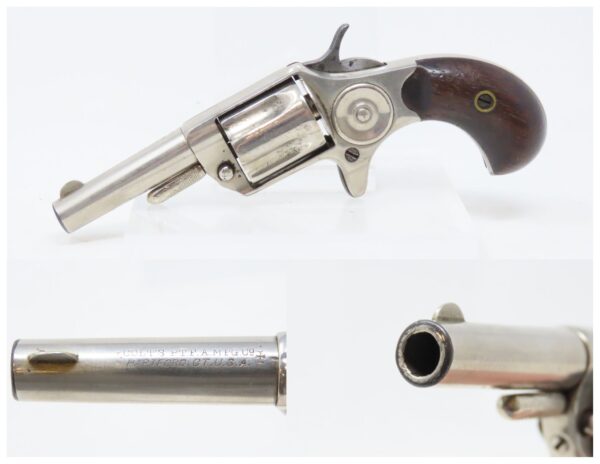 Here we present an antique Etched Panel Colt New Line .30 Caliber Rimfire Revolver, made in 1874 in Hartford, Connecticut. A single action revolver, this small pocket revolver was one of a number of inexpensive handguns produced by Colt from 1873 to 1884. The “New Line” was Colt’s first production model handgun chambered for .32 caliber and outnumbered all other pistols in Colt’s “New Line” group. This revolver utilized a .30 caliber rimfire cartridge matched to a 5-shot fluted cylinder fitted to a 2 ¼” long round barrel. The .30 caliber models were manufactured between 1874 and 1876 with 10,946 revolvers being produced.

This revolver was designed to be a small but potent self-defense revolver for stowing in one’s pocket in the 19th Century. Spur Trigger “Suicide Special” manufacture was fierce during this time, and Colt struggled to compete against the countless small shops making very similar, less expensive revolvers, though not necessarily of the same quality. The Colt remained a steady, reliable force in firearms for much longer than the rest. This revolver features 5 shots of .30 Rimfire, a handsome wizened nickel finish and rosewood grips.

The overall condition is good. The bore is in good shape. Original finish. The cylinder does not index properly and freewheels. Legible markings. Both grips are in good shape. Numbers match. Here is a very handsome and collectible specimen of the Colt New Line .30!