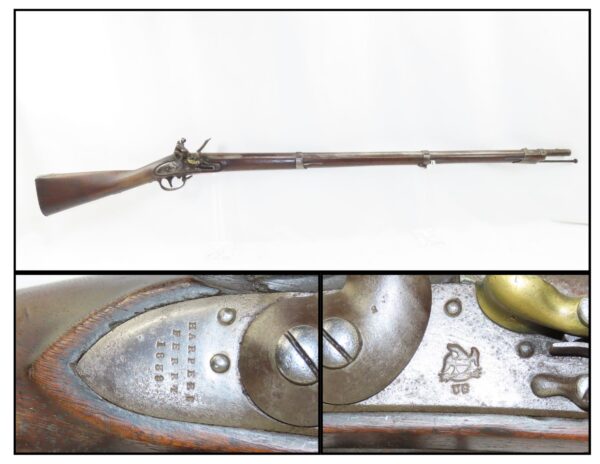 Here we present a U.S. Harpers Ferry Model 1816 Flintlock Musket, manufactured at Harpers Ferry, Virginia circa 1839. The town of Harpers Ferry is nestled into a valley at the confluence of the Shenandoah and Potomac Rivers. Originally located in Virginia, Harpers Ferry became part of the new state of West Virginia in the middle of the Civil War in 1863. The Model 1816 was manufactured at the U.S. Armory there between 1816 and 1844 with over 350,000 produced during that period. This is a Type III musket manufactured between 1836 and 1844. The Type II was made between 1822 and 1836, while the Type I was made between 1816 and 1822. This model was used by Texans during the Mexican-American War. During this conflict, the flintlock version of the Model 1816 was preferred by U.S. regular forces, due to percussion cap supply concerns. This model was also used during the early years of the American Civil War until around 1862.

The War of 1812 revealed many weaknesses in American muskets. In an attempt to improve both the design and manufacture of the musket, the Model 1812 musket was created. The Model 1816 made further improvements and replaced the Model 1812. The M1816 was a smoothbore, muzzle loading weapon which used a .69 caliber musket ball. It was in production at Springfield (325,000) and Harpers Ferry (350,000) between 1816 to 1844 with around 675,000 muskets produced during this run. It saw service during the Mexican-American War and was even pressed into service during the Civil War, due to the shortage of guns. In the 1850’s, many 1816’s went through the conversion from flintlock to percussion. These were some of the most abundant weapons available to both sides, being in the hands of state militias, in the first days of the American Civil War. This musket is symbolic for the westward expansion of the country throughout the first half of the 19th century. The 1816 Springfield saw service in the Texan Revolution including the Battle of the Alamo and the Battle of San Jacinto.  After the independence of Texas, the 1816 musket was chosen as the first standard musket of the Texan army in 1839.

The overall condition is good. This is a nice reconversion. Strong action. Smooth bore, remains clear. Solid walnut stock with an expected amount of wear (Contains a stable, thin hair line crack on the left buttstock at the butt plate). “1839” dated lock and barrel tang.